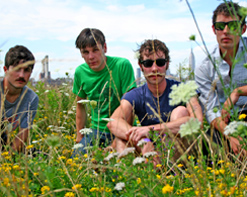 Greetings my indie rock programming cohorts, it’s Andy Gesner and the staff from HIP Video Promo. Although their brand of wild-eyed, tuneful garage punk is unlike anything else in contemporary indie, the Black Lips have still been the talk of the underground for the past year. The Atlanta quartet’s explosive, raucous stage show has earned them notoriety (and rabid fans) wherever they’ve played, and the recent VICE Records release of the all-live Los Valientes Del Mundo Nuevo has only solidified their rep as a ridiculously exciting gigging group. Recorded in Tijuana – that capital city of licentiousness – Los Valientes captures a group on the brink of self-immolation, playing insanely-catchy garage punk tunes with the vigor and zeal of rock and roll evangelists.

The mainstream media have begun to pay attention: both Spin andRolling Stone have printed features on the Black Lips, and the New York Times posted a video journal of the group’s experience of SXSWto its website. Calling the Black Lips the “hardest working band” at the festival, the ten-minute Times piece covers the band’s hyperactive schedule (nine shows in two days, plus interviews and photo shoots!) That kind of determination and drive has been the soul of the Black Lips enterprise since the late Nineties – it helped the group get past the tragic and accidental death of its original guitar player, and it’s allowed these unrepentant mavericks to navigate the treacherous waters of the music industry without sacrificing their vision or their sound.

But none of the energy, fury, or debauchery would matter at all if the songs weren’t great. Black Lips conjure the black-light intensity of the 13th Floor Elevators or The Seeds, kicking out druggy, reverb- and distortion-drenched garage-rock nuggets. “Cold Hands” (available now only as an import 7”, which seems only appropriate for a group so firmly rooted in Sixties underground punk) will surely be a highlight of Good Bad Not Evil, the band’s upcoming VICE Records studio debut, available September 11th nationwide. It’s a quintessential Black Lips cut: rough-edged and brutal, with neopsychedelic guitar flourishes, an infectious beat and an irresistible melody. Singer Cole Alexander coughs out a story of desperation and danger as the group, furious, threatening and formidable, squalls behind him.

A band like Black Lips demands a performance video, and the “Cold Hands” clip is a particularly exciting one. Shot in grainy black and white, it captures the quartet in their element – a slightly seedy club, packed from wall to wall with inebriated revelers. At times, it’s hard to tell who’s on stage and who’s in the audience, and that, of course, is part of the point: for Black Lips, the fourth wall is no meaningful barrier. Stagelight sweeps the spaces between the players, and the four musicians crash around the stage, bouncing up and down to the backbeat. When the song hits the psyched-out solo section, the footage inverts – and suddenly, we’re watching the Black Lips in super-high-contrast. Faces, bodies, and instruments appear bright white, and the room around them a deep black. Flashes of strobe behind them appear and disappear like inverse inkspots; punctures in the darkness, bleeding across the top of the frames.

It’s always such a treat to be working with our pals at VICE Records to bring you another fabulous video that we’re confident will be an asset to your programming! Additionally, please do not hesitate to contact us if we can set you up with either copies of Good Bad Not Evil in the near future or if you’d like to catch up with the band for a video interview during their five week national tour that begins on September 12th! If you need more info, call Andy Gesner at 732-613-1779 or e-mail us at info@HIPVideoPromo.com. You can also visit black-lips.com  to find out more about Black Lips.