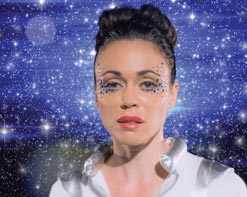 Our Room, the second album from Blue Tofu, is the continuation of a long journey that begin over 15 years ago. After forming Blue Tofu in 1997, Andrea Mathews and Tim Story released their self-titled album in 2001 to much critical acclaim. Keyboard Magazine called it “a CD that take pop music in a genuinely fresh direction… The music itself defies pigeonholing.” This is a disc and sound that had staying power as well. Twelve years later, that album was named by The Absolute Sound magazine as one of the best 40 albums of the last 40 years, raving “their music is at once lyric and unflinchingly honest, with an all-to-rare (nowadays) feeling of life lived rather than romanticized… It never fails to bring down the house.”

Last year the duo released the long awaited follow up, Our Room. Years in the making, Andrea and Tim cook up a rich, brooding, utterly compelling followup to their acclaimed debut. Story’s dark, immersive grooves and Mathews’ haunting and seductive vocals conjure up a world of devastated relationships and defiant hope. Balancing the angelic with the raw, Andrea’s lyrics can tease with innocence or rip with scathing precision. By turns fragile, theatrical, ravishing and ravished, when in ‘Lit Up’ she whispers “you’re gonna love me til you die” you’re not sure if it’s promise or threat. Story’s swirling downtempo soundscape is equally hard to pin down – slow retro organ riffs are punctured by hyperactive drum fills; a stately acoustic cello trades lines with a slab of overdriven electronica. A vulnerable confession turns into an infectious sax-fueled uber-ballad in the album’s rousing closer “Lorain”. Like the album’s cover art -an utterly decayed ruin of a room, rendered in sumptuous near-surreal colors – Our Room finds beauty in unlikely places, and a bit of grime in even the sunniest.  Flirting with styles and references that span decades, it remains beholden to none.

This fearless and unique approach is never more evident than in the new video for “Hunger Tango.” Masterfully directed by Alvin Franklin, “Hunger Tango” is an intergalactic trip of epic proportions. The video follows Mathews as she serves as the steely and resolute captain of a space craft manned by some of the most gorgeous extraterrestrials of any galaxy. Eventually she and her crew make their way to Earth and naturally the people of the planet are fascinated by this beautiful deity that has arrived from the sky. We won’t give away what happens next but thanks to the exceptional music of Blue Tofu and the mind-blowing CGI of Alvin Franklin we can promise you it is a fascinating story that you won’t want to miss!

We are very excited to work with such a uniquely talented duo like Blue Tofu. We are here to get you whatever you need to get their video into your programming. Please contact Andy Gesner and the HIP Video Promo staff at (732)-613-1779 or email us at info@HIPVideoPromo.com for more info. You can also visit www.BlueTofu.com/.