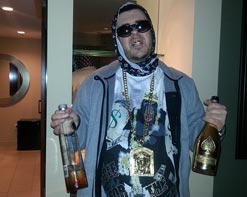 It only happens once in a life time when a person must strive against all odds only to emerge victorious throughout life’s eminent struggles.

Rapper Bomshot (Robert Willey) came from a tough city, background in Roxbury section of Boston, Massachusetts. This is the type of neighborhood where you do what you have to do to survive and grind out of tough, street life situations. Yet this is just the type of environment that can mold the right person, who is ready to lear and can to turn the negative into a positive. A prodigy with a vision, the desire to make major musical achievements and will not be stopped until he tastes the sweet taste of success. Bomshot is “the next big thing”!

Let us start with the “Devilz Rejects”, a duo with Bomshot and Jus Allah of Jedi Mind Tricks. This album “Necronomicon” features GZA (Wu-Tang), a highly successful album that sold over 60k units with virtually no promotion and gained Bomshot great notoriety, fan base and recognition along with major controversy.

The next illustrious project that Bomshot would come to release was “Warghosts”, a duo with Wu-Tangs “Holocaust” who was featured on RZA’s first solo platinum album, “Bobby Digital In Stereo”. Which became another great independent success.

After being released from prison, Bomshot would then decide to change his musical venture from a hobby-est and extreme lyricist an upgrade towards a more relevant style of music. In attempts to “go for the gold” entering more into the business aspects of the game and reinventing himself as “Mr Montega Man”. Montega reflects the drug dealer influence Bomshot witnesses in the streets where he was raised. A “trapper” on the chase for the almighty dollar. Fast cars, sexy strippers and lots of cash, which also portrays the recent change in the direction of the ever evolving state of hip hop.

This is when Bomshot really begins to step up his game and take his musical talents to new heights. With his efforts to engage with the big time bosses of the trade and at the same time showing and proving “true versatility”. Which other rapper do you know, who has done both genres of rap, yet makes it sound so authentic?

Here at HIP, we love to push the envelope, and there’s no question Bomshot and his new “Trickin'” are exactly what we’re talking about! For more information on Bomshot please contact Andy Gesner and the HIP Video Promo crew at (732)-613-1779 or email us at info@HIPVideoPromo.com for more info. You can also visit www.Twitter.com/Bomshot/.