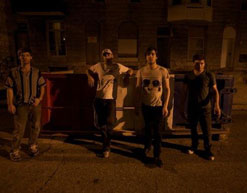 Bones Howell is throwing a party — and it’s for carnivores only. The boys in the group (Bones Howell is the band’s handle as well as the name of the raucous frontman) have turned the rooftop of their Brooklyn apartment building into a barbecue pit, and if you’re wild enough, they’re ready to give you a helping of what they’re serving. And when Bones Howell sets up in a corner and launches into their frenetic new single, the gathering really goes into overdrive.

Some bands are lucky enough to chance upon a name that sums up their strengths. In Bones Howell, everybody has an appropriate handle. The singer’s performances are raw and sinewy, and he’s the possessor of a pavement-rattling howl. Guitarist Dark Cave plays riffs that slither at the listener like a filthy primeval beast; Boxcar, the bassist, is as solid as they come — and he can’t be derailed. And the drummer, Woodchip, hammers on his snare like a berserk machine, chopping away with uncommon intensity. Together, they’re an unstoppable force: a brutal, streetwise, delightfully-nasty rock combo that couldn’t have come from anywhere but New York City.

Bones Howell, their debut EP, showcases everything they do so well, discharged with all the attitude you can handle. Here’s a set songs about being destitute and lost in the urban jungle, love and sex during wartime, alienation, a sick (and eventually dead) girlfriend, and, of course, red meat sizzling on the grill. With a wigged-out “meat and potatoes” refrain, “BBQ”, the kickoff single and lead track, sounds to us like a perfect anthem for summer parties to come. The band’s scalding performances on the Brooklyn’s hippest stages have won them comparisons to Jon Spencer Blues Explosion, Rocket Form The Crypt, The Horrors, and other masters of inner-city scuzz-rock.

But don’t call Bones Howell ungenerous, or oblivious to the needs of their audience. The “BBQ” clip opens with a warning to vegetarians, Buddhists, pregnant women, and the otherwise squeamish. (They also appear to treat their attack dogs with courtesy and respect.) Suitably warned, the viewer is ushered into an open-air den of good-time depravity: lots of tough-looking guys in shades, good-looking young women, cans of beer, and slabs of beef. As befits a song as straightforward as “BBQ”, much of the video is shot in high-contrast black and white — sometimes image-reversed to look like a live-action photo negative. It’s grainy, arresting, and distorted, and it fits the tenor of “BBQ” and Bones Howell perfectly. They’ve made the sort of clip where the camera lens is always in danger of getting splashed — by beer, or sudsy water from the swimming pool, or something that’s really meant to go on a burger.

It is our distinct pleasure to have the opportunity to work with Bones Howell to bring you this tasty new clip. If you need more info, call Andy Gesner at 732-613-1779 or e-mail us at info@HIPVideoPromo.com. You can also visit their Bandcamp to find out more about Bones Howell.