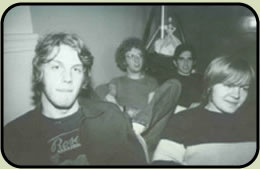 It’s hard to imagine that it was almost 15 years ago that Sub Pop Records started putting out records. Over the years, despite repeated exaggerated rumors of their demise, this little label has grown into one of the most indie-respected music labels in the world. Not only did Sub Pop find Nirvana and single handedly put Seattle on the musical map, they continue to release the most impactful, daring and cutting edge music (and videos) out there. HIP Video is proud to present “Nothing,” the brand spankin’ new video from punk/grunge phenoms The Catheters!

There is a second medical use for catheters…to increase blood flow…and in that sense, these shaggy hipsters are the real thing. This is some driving rock n’ roll that will certainly set hearts a thumping, arteries a-dilating, and limbs a-twitching. It’s no wonder that The Catheters new CD is receiving raves here and across the pond.

It seems oxymoronic, at first blush, to call something as sweaty and beer-soaked as Static Delusions and Stone-Still Days “refreshing”; but that really is the best word for it. This is pure balls-to-wall rock of the sort that hasn’t been played by young musicians in recent memory (the video depicts what is probably a regular occurrence, a basement punk rock show run amuck). Sometimes it is necessary to reinvent the wheel, and this grimy quartet has done that and stolen fire from the gods besides.

Inevitably, comparisons with the Stooges leap to mind, and this in fact may well be the best example of rock n roll at it’s nastiest since Iggy Pop’s Metallic KO was released (or perhaps “escaped”) nearly thirty years ago. The Catheters are worthy heirs apparent to their hard rocking forbears. Perhaps they’ll mellow as they mature, but I wouldn’t bet on that. For now, The Catheters are serving pure rock like a good Irish Coffee…fresh, hot, and laced with something powerful.

While The Catheters may musically remind you of Mudhoney, don’t let this Northwest quartet’s icky name or their Dead Boys “young, loud and snotty ” approach scare you off. Fans of the golden age of punk and MC5 will undoubtedly be thrilled with “Nothing,” a clip filmed in their hometown of Seattle and a video that reveals an energy and urgency that makes current rock n’ roll heroes like The Strokes and The White Stripes look like lightweights. This is the first music video by Whitey McConnaughy who, when he’s not working for pennies for Sub Pop, runs cameras for Jackass, the TV show and the soon to be released full length feature film.