Charlotte Gainsbourg “The Songs That We Sing” 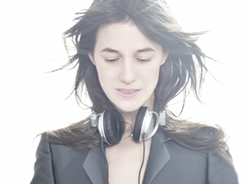 Greetings music video noblesse! It’s Andy Gesner and the staff from HIP Video Promo, here with another stellar new clip from a challenging pop musician. Charlotte Gainsbourg – daughter of the iconic Serge Gainsbourg and Jane Birkin – was born into notoriety. But since she released her first solo LP at the age of 13 (the notorious, provocative Charlotte For Ever), she’s made her own name as an actress. Gainsbourg has appeared in more than twenty movies, including Michael Gondry’s The Science Of Sleep, the Oscar-nominated 21 Grams, Lemming, and the most recent Hollywood adaptation of Jane Eyre. This year, she’ll be seen in I’m Not There, the anticipated biopic about the life of Bob Dylan. Her films are arty, moody, ambitious; and her interpretations of the characters she’s played have been deep, nuanced, and often hypnotically compelling. She’s become one of the greatest stars of French cinema, a fixture at Cannes, and respected wherever serious films are shown.

Her talents as an interpreter and storyteller are on bold display on the stark, literate 5:55 – her first new set of songs in twenty years. She’s surrounded herself with a magnificent supporting cast: Nicolas Godin and Jean-Benoit Dunckel of Air composed and performed most of the music on the album, while Pulp’s witty Jarvis Cocker and sardonic Neil Hannon of the Divine Comedy assisted Gainsbourg with the lyrics. Nigel Godrich (Radiohead, Beck, Air) sits in the producer’s chair, and Nigerian percussionist Tony Allen – Brian Eno’s nominee for “best musician in the world” – plays drums on several tracks. But Gainsbourg’s sensitive, cautious, emotionally vulnerable performances make 5:55 feel less like a star-studded session and more like an intimate confession of desire, guilt, and late-night desperation. For all the talent she’s assembled, she’s the dominant personality here.

Upon its European release, 5:55 shot to the top of the French charts, and has sold more than 300,000 copies. Critics on both sides of the English Channel were ecstatic: the Parisian press loved the album, and in the course of a five-star review, theGuardian in London called Gainsbourg “a stunning interpreter of songs and situations”. Advance American press for the April stateside release of 5:55 has already been highly complimentary – Heather Phares of the All Music Guide praises the album as “a sophisticated set that touches on her father’s brilliantly louche, literate pop without being overshadowed by it.”

As an experienced film actress, Charlotte Gainsbourg knows how to address the camera: when to lean back, when to let a beam of light catch her hair, when to coyly turn her eyes away, and when to punctuate a cutting line with a sly glance. In the video for “The Songs That We Sing”, the lead single from 5:55, Gainsbourg rarely looks at the camera directly – instead, she leans forward in her chair, head down, singing to herself, as if lost in private thought. The clip is set in a recording studio, but it isn’t the typical “making of” video that we’re all accustomed to. Instead, the room isn’t set up yet. None of the instruments or amplifiers is plugged in, the mic stands are stashed in a corner, and even the chairs are piled up at the side of the room. Nothing has been plugged into the patch bay yet. The clip communicates a tremendous sense of waiting: reflecting before performance, quietly thinking and mapping out strategies, the air heavy, room crackling with potential energy. Then, the rest of musicians arrive – and they’re off..

Jamie Farkas and Vice Records have already brought us two of the biggest smash hits of the year with Bloc Party and 120 Days and we’re excited to be working with them, as well as the good folks at Because Music and Atlantic Records to bring you this dazzling clip. We have plenty of copies on hand of Charlotte’s new record, 5:55, on hand for all of your on-air giveaway needs, so don’t hesitate to be in touch if you’d like to get your hands on it! If you need more info, call Andy Gesner at 732-613-1779 or email us at info@HIPVideoPromo.com.