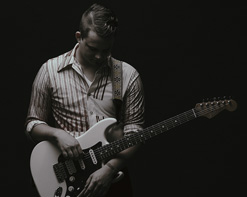 It’s no secret that Clay Melton absolutely rocks, but in his new music video “Secrets” he insists he has something to tell you. What more can be said though, after we saw his natural talent on the guitar in his last video “Home,” and on the biggest music stages across Texas? We soon found out that Clay is a never ending turbulent force in the world of rock, and there is no limit to what this master musician can do.

Inspired at the tender age of eleven when he first listened to Jimi Hendrix’s “All Along The Watchtower,” Clay was instantly mesmerized and quickly introduced the guitar as the central focus of his life. Like Hendrix and SRV, he plays by ear, proving his natural talent. By the time he was 15, he was titled one of the TOP 10 Guitar Players in Texas under 20 years old. His stage experiences as a guitarist and songwriter have only grown from there.

“Clay Melton is a musician’s story-teller, and a guitarist’s god.” says Indie Music Reviews. Influenced by rock legends Jimi Hendricks, Led Zeppelin, The Beatles, and Stevie Ray Vaughan, Clay brings a style driven by soaring guitar riffs with a notable hint of Texas-blues. Critics and fans alike revel in Clay’s passion for his craft and his thrilling live performances. It’s one reason why Ritchie Adams from Red Hot Rock Mag says Clay “is certain to be recognized as one of this generation’s guitar heroes.”

So what does this guitar hero have to tell us? In his new video for “Secrets,” Clay takes us behind the scenes with his band into a garage where they perform the song with fervent. Reminiscing to his days when he would practice in a neighborhood garage, Clay jams out accompanied by drummer Zach Grindle and bassist Raymon Minton. The video has a scratchy 16mm film look grazing the surface, with some washed out color grading at the start of the clip. As intensity rises in the band’s playing, a lot more color is added transitioned by lens flares and precise editing. By the time the bridge hits, the video dives into a psychedelic kaleidoscope of color and sound easily related to the stylings of Hendrix and Zeppelin, and then slowly fades out to the ending that feels too soon.

We here at HIP are ecstatic to be working with this incredible young talent yet again! We’re eager to provide whatever we can to get this electrifying video into your programming, so please get in touch! Call Andy Gesner and the HIP Video Promo team at (732)-613-1779, email us at info@HIPVideoPromo.com or visit www.ClayMeltonBand.com for more info on Clay Melton.

For info about other Clay Melton music videos, click HERE