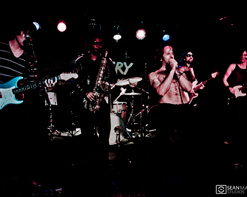 COLIN SCHILLER AND THE REACTIONS

Just because summer is gone, it doesn’t mean that you can’t have a little raunchy hot fun! It’s Andy Gesner and the HIP Video Promo staff, with the newest video from Colin Schiller and The Reactions that kindly asks that you please pass on any residual girl play his way, since you have gotten enough to keep you occupied. Yes, Schiller is back from this summer’s feel good indie glam jam “Dizzy” to bring you a massive chorus with mammoth hooks in his raucous party anthem “One Jenny.”

Colin Schiller and The Reactions don’t shy away from the fact that they come from the center of the indie rock universe, Brooklyn, NY. However, they also don’t deny their heresy towards all that is “hip” and trending to embrace the pagan gods of rock and roll’s past and to have a lot of fun doing it. In a life that is all too serious, Colin Schiller and his gang of ax wielding ghouls agree that rock and roll should be an amusing escape. Schiller resonates with a bit of Huey Lewis, Costello, and The Boss with a splash of nerd rock goodness in the manner of Weezer, Ok Go and Motion City Soundtrack. This unique blend of indie glam and opposition to the currently in-style darkness has led to Colin Schiller and The Reactions becoming part of The Deli Magazine’s “Top 300 Indie Rock Bands” thanks to their fantastic debut record Endless Holiday, which is slated for a January 2012 release on Milk It To Deaf Records. Hitting the ground running, they have already rocked CMJ Music Festival, Dewey Beach Music Conference, and popular New York clubs like The Mercury Lounge and The Knitting Factory. With their summer single “Dizzy,” Colin and the boys won mtvU’s The Freshmen, earning themselves regular rotation on the popular music video network. The band is also touring the States this fall in support of their new release.

The concept behind “One Jenny” will have you smirking for hours on end, as Colin laments one of his friends by writing a Springsteen “Glory Days” style tribute for him. The problem at hand is that this unnamed friend seems to get a new girl to share his sinful bed with him every single night. Most of the time this guy doesn’t even know the name of the girl, nor really care for her body type or interests. That’s where Colin chimes in with the hilarious proposition to pass on some of the conquests his way! Being a showman, Schiller plays both roles in the clip himself, donning a grotesque blonde wig for the role of said friend, resulting in all sorts of onscreen debauchery. We will disclose the naughty tidbit that one of the girls in the video is actually played by a man, and we’ll leave you to discover which one it is for yourself! However, this wouldn’t be a Colin Schiller and The Reactions video without an energetic performance section that results in a full on party at the finish.

Colin Schiller is an artist who refuses to fit the mold and prospers from it. This clap-along sing-along hit in the making is the perfect dose of happy for your fall playlists, so join in on the fun. We have copies of Endless Holiday available for you to check out, so be sure to let us know if you’d like some! If you need more info, call Andy Gesner at 732-613-1779 or e-mail us at info@HIPVideoPromo.com . You can also visit www.ColinSchillerandtheReactions.com to find out more about Colin Schiller and The Reactions and any show dates near you.

For info about Colin Schiller and The Reactions’ “Dizzy” video, click HERE