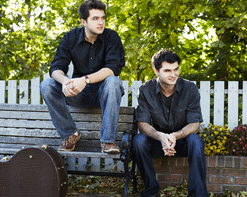 Musicians and bands speak often of the kinship that develops over the years of writing, performing, recording, touring, and everything that goes into chasing and obtaining their dreams. In most cases it is merely a metaphor for a close relationship, but for The Como Brothers Band it really is about family. Anchored by songwriters Andrew and Matt Como, the group is a collection of musicians that value organic music, musicianship, and songs with original integrity.

They knew early on that music would be more than just simply a hobby, but rather a way of life. They were encouraged by their parents at an early age and while most of us were merely fascinated with the idea of live music and performing, they were cutting their teeth (maybe even baby teeth?) at family parties and social functions. By the time they had reached their teens and now their early twenties they were an experienced and well-oiled machine.

Audiences throughout the Long Island and New York City have been taking notice as the band has been earning recognition and accolades everywhere from Warped Tour and opening for The Wallflowers on the live front, Real World St. Thomas and Keeping Up With The Kardashians on the licensing front, and syndicated radio like Pandora, Revolver Underground, New Driven Cruisin Show, and many more!

To complete their introduction we are bringing you not one, but two stellar videos for your viewing enjoyment. The first video for “Straight Face” features Andrew on lead vocals and as the principal actor in the video. The song is a light-hearted and sincere statement of adoration towards a very special lady in his life. Although she’s somewhat aloof to his presence and they go through a series of near misses, they do eventually come face to face, allowing Andrew to show her (with the help of his band) his true feelings with an impromptu concert on the town square. All’s well that ends well and it’s no surprise that he does get the girl!

For “Late Nights”, they switch it up and brother Matt takes lead vocals for this track. While “Straight Face” had a jazzy and poppy upbeat feeling to it, “Late Nights” is decidedly more bluesy with a good dose of rock and roll injected into it. The video features shots of the band jamming and recording together into the wee hours and also follows Matt as he wanders through the night. It’s not always easy to be a creature of the evening, but like we said this is a way of life for The Como Brothers Band and they’ve adapted themselves to make the night theres. The overall vibe is dark and infectious and offers a perfect compliment to “Straight Face”, and showcasing the diversity of their musical talents.

We’re thrilled to be working with The Como Brothers Band to bring you these two videos. They’ve got a lot in store in the near future, including their brand new release, Baby Steps, so please keep your eye on this group and let us know if you need anything else to get these videos into your programming. Please contact Andy Gesner and the HIP Video Promo staff at (732)-613-1779 or email us at info@HIPVideoPromo.com . You can also visit www.ComoBrothersBand.com or www.Twitter.com/ComoBrosBand for more info.