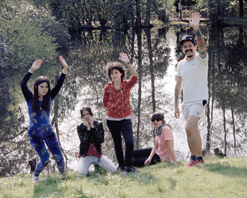 Howdy programming pals! It’s Andy Gesner and the staff from HIP Video Promo, here with the fan on and all the windows down. Summer is in full swing, the sun is shining, and with it comes memories of seasons past, and the music we associate with warm weather, long days, and hot nights. For instance, two years ago at this time, you couldn’t walk into a hipster bar or club in New York City without hearing “Let’s Make Love And Listen To Death From Above” or “Music Is My Hot Hot Sex” by CSS. In fact, those two songs proved so popular with fans of indie music that we’re still hearing them – although it might be that the hooks are so firmly embedded in our heads that we’ll never stop playing them back. We associate CSS with summer, and just in time for the high season, the Brazilian export is back with a brand new album..

They’ve grown tremendously, too, and added new and welcome dimensions to their sound. After experiencing worldwide success, the whirl of the international festival circuit, and hit songs in countries all over the globe, the Sao Paolo combo has returned to the studio, sharpened their musicianship and tightened their grooves. Cansei de Ser Sexy won plaudits for its insouciant attitude, clever lyrics, infectious electro-funk, and insanely catchy choruses; Donkeypreserves those elements, and adds to them new-wave urgency, dancefloor swing, and rock explosiveness. “Rat Is Dead (Rage)”, the first single from Donkey, echoes both the Pixies and the Breeders (whose “Cannonball” the band has been known to cover) – it’s raw, angular, and slinks from a propulsive verse into a raucous, indelible chorus. As always, the interaction between appropriately-named singer Lovefoxxx and her equally-stylish bandmates is playful and engrossing: it draws listeners effortlessly into the group’s embrace.

The CSS debut album connected with listeners and critics all over the globe because of the fantastic music – but we’d wager the group’s winning (and often homespun) videos had something to do with their popularity, too. American mainstream TV viewers might know “Let’s Make Love And Listen To Death From Above” from its placement in the promotions for Ugly Betty, but indie music fans swear by the song’s eye-catching clip. Set in an oddly depopulated Sao Paolo, the “Death From Above” video was done in one long and continuous shot – and one that somehow allowed each member of CSS to make his or her personality manifest. For the “Rat Is Dead (Rage)” clip, veteran video director Nima Nourizadeh has engineered something similar – even if it looks at first glance like it’s completely different. It’s a performance spot, but it’s one with very few cuts: the camera whirls around a darkened stage while the musicians weave in and out of the frames with the frantic energy that’ll be familiar to anybody who’s seen CSS live. Every member of this South American collective looks terrific: approachable and friendly, but stylish, too, and the costumes in the “Rat” clip are suitably outrageous and expressive. As always, Lovefoxxx steals the show – already an indie heartthrob, don’t be surprised if the mainstream becomes similarly smitten.

Thanks again to the Sub Pop crew for hooking us up with this excellent video, as well as plenty of copies of Donkey for your on-air giveaway needs. You can catch the band many times over the next few months across the US, so hit us up if you’d like to set up a video interview! If you need more info, call Andy Gesner at 732-613-1779 or e-mail us at info@HIPVideoPromo.com. You can also visit www.SubPop.com or www.CSSHurts.com to find out more about CSS.