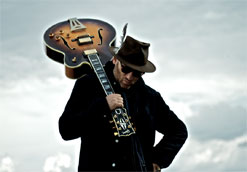 Some artists know their own talent, but some artists need an outside vision to know their true potential. Smooth jazz artist Dave Sereny had studied composition and arranging at Berklee College of Music and worked with notable jazz musicians; upon working with acclaimed producers – those who had worked alongside legends like Aaliyah and R. Kelly – he discovered potential as a vocalist. These producers told him, “You’re going to do a record with me.” He began vocal lessons, and quickly mastered his vocal range.

This spring, Dave Sereny released the clip for “Talk To Me”, which was his first as a vocalist. With a deep bass line, saxophone accompaniment, and striking guitar riffs, we see him in his element at his home studio in Toronto (the same place where he runs his independent record label, Groove United), as his voice hit notes high and low.

Recently, Dave released his album Talk To Me, and he’s back with another visual for the track “Spotlite.” There are no vocals or lyrics on “Spotlite”; instead, the focus is on the chipper and impressively intricate lines he plays on the guitar. Yet the effervescent spirit of the music remains the same, and it’s shown on screen, too. Directed by Kyle Ingram, the clip starts off with Dave playing his guitar alone in a courtyard in Philadelpia. Soon, a young man and woman catch wind of what he’s playing and can’t help but get up and feel the groove! Dave leads the way through the city, like “The Pied Piper”, and his entourage grows larger, as everyone they pass stars clapping their hands and swaying their hips, moving to the music. It all ends with him on stage playing a live show. The City of Brotherly Love is a perfect setting for “Spotlite”, and it’s a feel-good video if there ever was one – are you dancing yet?

It’s a blast to be working with Dave Sereny once again to promote the clip for “Spotlite.” We hope you embrace it as much as we have here at HIP and include it in your regular programming and online presentations. Rest assured we’ll have plenty of outstanding Dave Sereny merch to set up online/on-air contests and giveaways throughout the campaign. For more info on Dave Sereny, you can contact Andy Gesner and the HIP Video Promo team at (732)-613-1779 or email us at info@HIPVideoPromo.com.

For info about other Dave Sereny videos, click HERE.