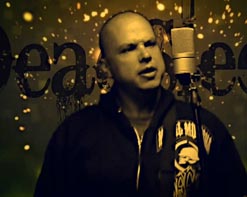 The DeadSleep bio “I come from Long Island. Loved metal my entire life. Here we go!!” As an artist who has grown up in the always-plentiful metal scene of Long Island, Dez made his mark originally performing in the band ELEMENT. After years in the collaborative nature of being in a band, Desi Pena (Dez, for short) decided to take a vastly different approach with DeadSleep.

As multi-talented singer, songwriter, and musician, it was a natural progression for Dez to take over all of the duties involved in making “As Rain Washes Over.” Everything is written, composed, and recorded by Dez himself. Channeling influences such as As I Lay Dying, Killswitch Engage, and Pantera, DeadSleep straddles that all-important balance between power, fury, and melody. “As Rain Washes Over” feels like it is hitting you directly in the solar plexus, but it also sings to our inner senses.

This “take the bull by the horns” approach has worked for Dez not only with the music, but with the “As Rain Washes Over” video as well! Dez shot, edited, and starred in every frame of this video! Mixing a diverse amount of performance footage, chaotic text splashing onto the screen, and a boat load of sinister CGI, this video touches on all levels of the visual experience. It’s apparent that Dez is a master on all of the instruments he touches, and the “As Rain Washes Over” video shows that he’s equally savvy and skilled behind the camera too!

We are incredibly pleased to be working with such an ambitious and hardworking artist like DeadSleep. We would love to hook you up with whatever you may need to include this video in your programming. Please contact Andy Gesner and the HIP Video Promo crew at info@HIPVideoPromo.com for more info..