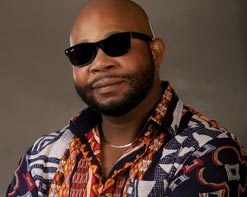 Years ago, when growing up in his homeland Nigeria, De’boyed grew up the same way as many teenagers around the world. His love and knack for music was frowned up by his business-owning parents, but it never stopped him from pursuing his passion. He secretly began sneaking out of his bedroom window late at night, with his modest wardrobe concealing his performance outfits underneath. He began hanging around with his friends at local clubs and quickly became a popular artist in the local scene. The applause and adoration made it all that much harder to maintain his secrecy, but by that time he had become a bonafide star in Nigeria!

It was only natural that he would want to move onto a larger audience and to try to conquer the world. With a bittersweet mixture of pride and excitement, De’boyed said goodbye and relocated to the fertile musical scene of the United States. After planting his feet in the land of opportunity, he seized the moment and immediately began fighting the good fight to make his considerable talents known throughout Southern California. Since then he’s gotten heaps of positive attention, and two singles in particular have caught the attention of listeners, “Chinyere” and “Let’s Celebrate.” And just as you might expect, we have videos for both!

The first video for “Chinyere” shows part of De’boyed’s ability to take his music to heart without taking himself too seriously. The video begins with De’boyed as a worker on a construction site and while listening to his coworker lamenting his own romantic misfortunate he finds himself immersed in his sandwich of all things, watching flashbacks of past romantic dates with a lovely lady named Chinyere. Walking through downtown LA, quiet dinners on the beach, De’boyed turns on the charm with his lady, and it’s only a matter of time before his coworker and even the hard-edged foreman catch the vibe, seeing love in their drinks and sunglasses! It’s a lighthearted clip teeming with romance and delight.

For the second video, “Let’s Celebrate,” De’boyed keeps the party going with his sunny disposition and infectious melodies. What starts as a stuffy and uptight corporate meeting soon cuts loose into song and dance when De’boyed arrives as the courier who literally brings the party. We’re treated to various scenes of parties in the park, in the club, and of course, in the office. It truly is a cause for celebration, and we challenge you not to bounce your head and shake your hips to this delightful track.

We’re thrilled to be working with De’boyed to help introduce him to a brand new audience, and are certain that you and your viewers will jump onboard with him like we have here at HIP. Please contact Andy Gesner and the HIP Video Promo crew at (732)-613-1779 or email us at info@HIPVideoPromo.com for more info on De’boyed.