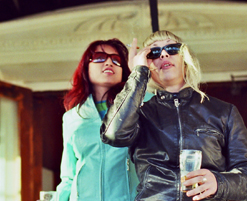 Hello programmers throughout the music video landscape! It’s Andy Gesner and the staff from HIP Video Promo, and we’re thrilled to be working with our friends at Bloodshot Records to help spread the word about Bloodied But Unbowed: Life In The Trenches, their remarkable compilation DVD. Now, lots of indie labels put out video collections, but Bloodied But Unbowed is more than just a greatest-hits package. It’s a story, told in videos and interviews, of a resolutely independent bunch of music-makers and music-lovers who share a roots-punk aesthetic and a will to defy convention. The Chicago imprint has made underground stars out of the bands on their roster, but that’s not what Bloodshot is in it for: instead, they’ve always been chasing after visionary moments. They’re also deadly serious about their role as indie guardian of the raucous musical traditions of the American Midwest: garage, blues, honky-tonk, R&B, and straightforward, no-nonsense rock and roll. Hence, record aficionados and ruthless rockers The Detroit Cobras are the perfect band for the label, and their video for “Cha Cha Twist” is one of the standout segments of Bloodied But Unbowed.

Considered one of the progenitors of the garage-rock revival in the Motor City, The Detroit Cobras make like the first wave of gutter punks: they don’t write their songs, they excavate them. The quintet revives vintage R&B and soul sides and injects them with venom, and even when their versions are infused with 21st Century exuberance, every note they play vibrates with tremendous love and appreciation for their sources. They’ve done justice to The Oblivians, added muscle to Jackie DeShannon, and even found unexamined dimensions in Otis Redding’s work. On the newly-released Baby, their scalding version of Allen Toussaint’s “Mean Man” stands as a rough-edged counterpoint to Elvis Costello’s recent interpretations. Their taste is impeccable, and their performances are unimpeachable.

Rachel Nagy’s tough-girl stance has always been the band’s calling card: her vocal treatment of these songs knocks them around just enough to prove how sturdy they really are. “Cha Cha Twist” is an old Hank Ballard tune; explosive enough to remind those of us who’d forgotten that Ballard’s influence on bare-knuckle rhythm and blues can’t be overstated. Nagy’s read on Ballard’s “Twist” coaxes the fight out of the track, and renders the sexually-charged undertones explicit. It’s fun as hell, too.

Director Anthony Garth’s interpretation of “Cha Cha Twist” has garnered attention for a small piece of casting that’s really insignificant to the video, but is still a nifty piece of trivia: Meg White of The White Stripes plays Little Red Riding Hood, and coyly teases her Big Bad Wolf with bare legs. The Stripes are long-time friends and fans of the Cobras, so it’s no surprise to see White in the clip. But she’s just one of many dancers who find the band behind a display window of a skyscraper, deposit a coin in a slot on the wall, and set them playing. The Cobras rock in front of a red screen, and before all the lights come up, they’re black silhouettes before a shield of crimson. Even when fully illuminated, they’re shielded from the street by the plate-glass. And what a menagerie comes to hear them!, midgets, toughs, lovers and old folks, roller girls, miscreants looking to vandalize the mechanism, and at least one little girl with a big lollipop. Nagy and band tear into the song, surrounded by mannequins, animating the streetscape with the force of their enthusiasm.

Many thanks to Nan Warshaw and Rob Miller at Bloodshot Records for bringing us this exciting new clip! This Michigan quintet will be out on the road touring right through the end of November, so feel free to hit us up if you’d like to see them in action or to get a video interview! If you need more info, call Andy Gesner at 732-613-1779 or e-mail us at info@HIPVideoPromo.com. You can also visit www.bloodshotrecords.com to find out more about The Detroit Cobras.