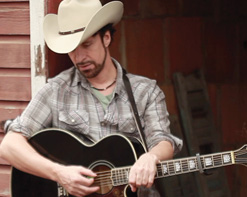 DuShane Band’s “Alabama Rain” music video is a heart wrenching story of the working class American in the 21st century. The band was formed by lead singer DuShane, who’s had a long stint in the music industry thanks to his former band, Law and Order(MCA Records). Living in New York City, but growing up on the music of Memphis and Nashville, DuShane Band’s sound is truly a fusion of art and culture.

The band’s newest single, “Alabama Rain”, opens up with an anthemic intro that brings a familiarity to the song, comforting the listener as they brace for the story’s impact. The line, “Johnny turned 20’s from the poor side of town” kicks off the first verse, putting you in the main character’s shoes. DuShane completes the verse with, “One day he got married and found a way / He had a new baby boy and landed a job / without any skills had to work twice as hard, working the steel mills 14 hours a day.”

Then, tragedy strikes- the mill shut down. What’s more? There is a second child on the way. Without a job or pay to support his family, Johnny hit rock bottom. He was left with no choice but to enlist in the military to make ends meet. The video ends with Johnny coming home a hero, reuniting with his family, and the fulfillment of his promise that they would never know that “Alabama Rain.”

All in all, “Alabama Rain” is a song of hope. The Johnny character featured in the story is all too relatable for a large portion of the United States right now due to the outsourcing of jobs and the shrinking of the middle-class. The lyrics in this song can speak to the hearts of those affected by these conditions and serve as a point of inspiration. The fresh sound and undeniable relatability of this song is sure to hook country and Americana music fans, and we’re so excited to watch the DuShane band flourish with the release of this video.

Karvin Johnson and the team at NMAP and KES Music and Video Distribution have served us up another winning clip, and we’re confident you and your viewers will embrace it. We’d love to get you involved with everything DuShane Band, so don’t hesitate to let us know what we can do on our end to make that happen. Please contact Andy Gesner and the HIP Video Promo team at (732)-613-1779, email us at info@HIPVideoPromo.com or visit www.KESDistribution.com for more info on DuShane Band.