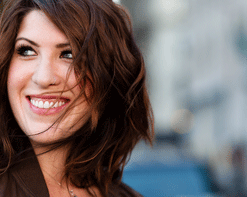 Singer/songwriter Evie Archer from Jersey City, NJ blends pop and rock genres to create raw and natural sounds in her unique and powerful music. At the mere age of two, she begged her parents to take piano lessons, and not long after she began writing original songs. HIP Video Promo is pleased to introduce the timely video clip “On Christmas Day.”

Although writing music at first was a task for Evie, the results are evident in her songs, which combine expert pop-craft with emotional candor; this candor harkens back to classic singer-songwriters like Carly Simon and Carole King, as well as more recent artists such as Alanis Morrisette, Rachel Yamagata, and Fiona Apple.

Evie began making music industry with Dana Calitri, who has an impressive track record as a performer, writer, lecturer and teacher, and whose husband Martin Briley is a renowned British singer/songwriter who has penned songs for artists such as Celine Dion and Pat Benatar. Eventually Evie was brought together with famed producer Gary Katz, who has been nominated for numerous Grammy Awards and produced the first eight Steely Dan albums, as well as albums by other legends like Diana Ross, Laura Nyro, and Joe Cocker. One of the first fruits of their labor is the gorgeous holiday number that will surely be a part of annual seasonal playlists, “On Christmas Day.”

Evie wrote “On Christmas Day” as a gift to her parents. The song enlightens all ears and gears music listeners for this year’s exciting holiday season. Evie plays the piano luxuriously as she sings the inspiring lyrics of this well-crafted tune all the while surrounded by strands of soft lighting. Slow camera pans and tasteful editing keep the focus on Evie and she effortlessly carries this holiday performance clip from the first notes on the piano until the last flawless vocal melody. With this kind of charm and talent “On Christmas Day” is sure to be remembered each and every holiday season.

The single “On Christmas Day” hit the airwaves on November 4th, and it will be playing at Macy’s stores throughout the country during the Christmas season. Evie’s self-titled debut EP will be coming out in early 2014. In the meantime, be sure to contact Andy Gesner and the HIP Video Promo staff at (732)-613-1779 or email us at info@HIPVideoPromo.com. You can also visit www.Facebook.com/EvieArcherMusic/ for more info.