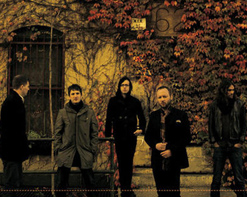 A warm hello to all my music loving pals far and wide! It’s Andy Gesner and the staff from HIP Video Promo, back with another clip that illustrates how easy it is for an imaginative indie band to shoot an imaginative, effective video on a shoestring budget. The Radical Friend directing team – Kirby McClure and Julia Grigorian – understand that archetypes and folk-imagery speak louder than special effects ever can. They work in broad strokes and bright colors, matching offbeat material with fairy-tails and oddly quotidian hallucinations. Their clip for Mixel Pixel’s “Abandon Ship” drew on timeless tales of the sea and communicated Saturday-morning innocence; their animated video for “Requiem For O.M.M.2” by Of Montreal was a love-story between a knight and his missing sword. There’s a sword and a knight in the Favourite Sons clip for “Pistols & Girls”, too – but this one is no cartoon. Instead, the video for the Brooklyn band’s single features live-action melee between a hipster artist-paladin and a dragon of his own creation.

It’s an appropriate short for Favourite Sons, a quintet led by an indie-rock stalwart who has been questing for the perfect hybrid of pop, rock, psychedelia, acoustic folk, and stark, Factory Records-inspired weirdness for more than a decade. Ken Griffin first caught the attention of the record-buying public as the guitarist and frontman for Rollerskate Skinny, whose 1996 album Horsedrawn Wishes is now acknowledged as an underground neo-psych classic. Following the breakup of Rollerskate Skinny, the Irish-born Griffin moved to New York City and recorded Dead City Sunbeams as Kid Silver. Although the Kid Silver album did not make waves upon its release, a devout following has since gathered around Dead City Sunbeams, and it is now considered every bit as challenging, memorably tuneful, and delightfully trippy as Rollerskate Skinny’s recorded output was.

No surprise, then, that rock critics have rushed to praise Favourite Sons – Griffin’s new collaboration with former members of Philly-based Aspera. “Should you be in search of another pop band that will steal your rock and roll heart as much as Echo & The Bunnymen and The Church did throughout the 1980s heyday of romantic post-punk”, raves Mackenzie Wilson in the All Music Guide, “then the Favourite Sons should leave you swooning in no time.” Down Beside Your Beauty, their startling debut, flirts with Cure-style new wave and Morrissey goth-pop, but will remind listeners most of Rollerskate Skinny’s sharp, focused songwriting and Kid Silver’s spooky intimacy. On “Pistols & Girls”, the lead single, the emphasis is placed on the gigantic beat and Griffin’s deep, pained, and powerful vocals. His singing has often been liked to that of Iggy Pop, and onDown Beside Your Beauty, he lives up to that lofty comparison.

The “Pistols & Girls” clip opens in a typical bedroom in a typical single-level suburban house. Here, a young and bearded man has assembled art supplies, but it’s unclear what he intends to do with them. Before long, he’s cutting boxes, measuring and magic-marking, laying strips of papier mache onto pink foam, applying glue, and staining the surfaces green. By the midpoint of the clip, his design becomes clear – he’s assembled a man-sized, cardboard dragon, appropriately fearsome with red-painted lips and construction-paper claws. He stands for a moment to admire his work – and it’s clear he’s worked very hard – and then dons a medieval helmet, draws his sword, and sets upon his creation. Amusing, sure, but there’s something tragic about it, too. The poor dragon that he’s labored so hard to make has no defense to his slashing and thrusting; it just stands there and takes the abuse. Thus does the artist become a hero: assembling a demon, polishing it until it shines, and then, with much fulmination, destroying it in front of the cameras.

Much gratitude to our friends at Vice Records for bringing us on board to share this artistic Favourite Sons original with you! If you’re in the Northeast, be sure to check out Favourite Sons on tour with Voxtrot and Au Revoir Simone! We’d love to set you up with a video interview or video ID with the band as well as copies of Down Beside Your Beauty for giveaways and contests. If you need more info, call Andy Gesner at 732-613-1779 or e-mail us at info@HIPVideoPromo.com.