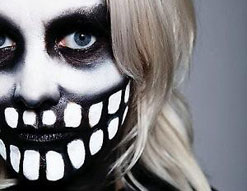 Hey, everybody, it’s Andy Gesner and staff coming to you from the HIP Video Promo headquarters, wishing you a happy and productive start to your autumn. By now, what can we say about the brilliant Fever Ray that we haven’t said already? If you’ve watched the three Fever Ray clips we’ve sent you over the past few months, you’ve surely come to the same conclusions we have. You know that Karin Dreijer Anderssen shrouds her songs in mystery; you know about her eerie palette of sounds and her masterfully suggestive poetry. You recognize her strange, engrossing synthesizer textures, her hypnotic machine beats, and the ghostly processed vocals that frequently feel downright twisted. You’re as familiar as we are with Anderssen’s trademark Nordic chill; chances are, you can’t get enough of it, either.

But above all, you know Anderssen’s distinctive visual aesthetic. That’s because it’s impossible to encounter a Fever Ray video — or a Fever Ray concert — without being profoundly affected by the experience. Pitchfork calls the Fever Ray album “a constant fount of sinister music video greatness”, and goes on to call “Seven”, the latest clip, a diabolical extension of that legacy. The website praises the “Seven” video’s “creeped-out, edge-of-psyche” vibe; like all Fever Ray clips, it’s spooky, arresting, instantly-memorable, and tremendously rewarchable.

Anderssen doesn’t appear in the video — instead, “Seven” is sung by a malicious-looking old woman in a remarkably bizarre outfit. Her headdress looks like a crystalline spiderweb; her dress is that of an urban shaman. Accompanied by a menacing, bearded bodyguard wielding a staff, she dances around the interior of a frightening barn (complete with farm animals!) Once again, Anderssen has discovered dangerous magic in the Nordic countryside. The song becomes an incantation, a necromantic spell cast on the viewer. Even without the clip, “Seven” is something of a sonic enchantment.

The longest song on the Fever Ray set, “Seven” is a strange and evocative meditation on friendship, familiarity, mortality, and fear — and Anderssen sings it all through some of the most destabilizing vocal effects in her arsenal. She does, at times, sound possessed, so putting the song in the mouth of a sinister old crone causes no imaginative dissonance whatsoever. Director Johan Renck (Bat For Lashes, The Streets, The Knife) is the perfect candidate to bring this to life since he is familiar with Anderssen’s nightmares: he’s the man responsible for Fever Ray’s trippy press photographs. It’s another astonishing clip in the arsenal of one of the most eclectic artists in contemporary music.

For info about Fever Ray’s previous video, “When I Grow Up” click HERE