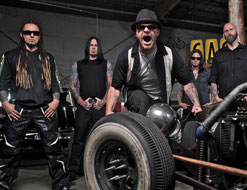 Hello fellow metal lovers, it’s Andy Gesner and the HIP Video Promo staff checking in with you with another powerful video from our favorite metal quintet; Five Finger Death Punch. By now, we’ve sung the praises of Five Finger Death Punch and their ability to not only rock harder than anyone else but to also have hooks and melodies that make the songs stand out from the pack. This is evident from the 320,000 copies of American Capitalist that have already been scanned, and all of the top notch press and recognition they’ve received from publications like Decibel, Alternative Press, Terrorizer, Metal Hammer, Revolver, Kerrang! and more. Their debut albumThe Way Of The Fist was certified gold and it would be no surprise to any of us if American Capitalist blows past that mark with singles like “Under And Over It”, which we brought you last fall, and the brand new video for “Remember Everything”.

Another thing about this band that endears them to fans across the globe is their relentless touring and live show. The last time we talked Five Finger Death Punch, the band was about to embark on a humungous national tour along with All That Remains and Hatebreed. Needless to say, the tour was a smash and the band is about to embark on another string of national and international tour dates. On the docket for this spring includes headlining shows across the US, stops at festivals such as Rock On The Range in Columbus, OH, the Download Festival in Donnington Park, England, and a whole slew more. All of this will just keep the band’s visibility at the top, and with “Remember Everything” sitting pretty at the #5 position on BDS Active Rock and #2 on the Mediabase Active Rock charts, metal fans will be hearing a whole lot from Five Finger Death Punch.

While many metal and hard rock bands can deliver an abundance of brawn with their music, that’s usually where it stops. On the other hand, we’ve always liked to think of Five Finger Death Punch as more of a thinking man’s metal band. Even though they can deliver a power chord or a riff that would stop a charging rhino in it’s tracks, one listen to frontman Ivan Moody’s lyrics will show that these guys put a lot of thought into their product. Take for example, the previous two videos you’ve received from us for “Bad Company” and “Under And Over It”. Filmed entirely by the band in Iraq while visiting US soldiers stationed abroad, we can see in the “Bad Company” video that appreciating and supporting our troops has always been a priority for this band, and they will walk the walk, not just talk the talk. Fast forward to “Under And Over It” and we saw a tongue in cheek clip about the absurdities of modern celebrity life and the band’s acknowledgment of the excesses and ridiculousness of it all. It all leads us to the new clip for “Remember Everything”, which very well may be Five Finger Death Punch’s most substantial and intimate composition yet.

The video for “Remember Everything” begins with a shot of just a young boy inside an open room with blank walls and a pureness that can often only be found in the mind of an adolescent. As the video goes on and the story develops, it follows the life of a young man whose life is defined in many ways by the abusive ways of his father and his addictions. What should be a happy birthday party, a game of catch and other father-son activities are tarnished by the demons. We see regular glimpses into a progressively darker picture being painted inside the you man’s mind which manifest themselves into his own life, leading him to his own family conflicts and eventually serving time in the military, in combat. In a cryptic twist, the story comes full circle and he is the one who is battling the demons of addiction, pushing away his loved ones and setting off on a self-destructive path. Although the band themselves only make passing appearances in the video, Moody’s presence is felt very heavily throughout. We can’t help but feel that his lyrics are being sung from the deepest parts of his own soul, seeking to find some sort of closure and resolution to issues that have haunted him for his whole life. Like we said, Fiver Finger Death Punch can deliver the brawn and the brains, and this is why they are the premiere metal band for 2012.

Huge thanks to the Prospect Park team for always having us as a part of the Five Finger Death Punch team, and as always we’re here to hook you up with anything you may need to get this video into your programming! Whether it be copies of American Capitalist or tickets to see the band when they are in your market, let us know. If you need more info you can call Andy Gesner and the HIP Video Promo staff at (732)-613-1779 or email us at info@HIPVideoPromo.com . You can also visit www.FiveFingerDeathPunch.com for more info about Five Finger Death Punch.

For info about Five Finger Death Punch’s previous video, “Under And Over It” click HERE