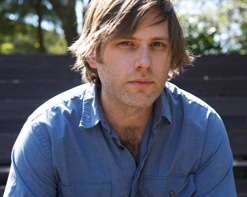 Howdy programming friends! It’s Andy Gesner and the HIP Video Promo crew with a most anticipated Sub Pop musical gem for your listening delight. In fact, we promise you a trip into musical growth, experimentation, the stretching of the indie folk genre boundaries, and trip into 1982 with our latest bit of goodness from a label and band that, both, never fail us in their audio-visual endeavors. Get ready to unbutton your shirt halfway and show some chest hair for Fruit Bats’ new “You’re Too Weird” music video.

Eric D. Johnson, who has recorded and performed as the Fruit Bats for a decade now, has not only gained recognition as an indie folk songwriter, but also has taken on sideman duties for bands including Califone, Vetiver and The Shins and more recently, soundtrack work for films like Ceremony and the soon-to-be-released Paul Rudd comedy Our Idiot Brother. Songs from the Fruit Bats catalog have also been featured in well-known Hollywood movies like Youth In Revolt. Some of you might also be familiar with “The Ruminand Band” music video that we’ve sent your way late 2009. For his new Fruit Bats release Tripper, Johnson brought in a live band to record the skeletal parts of the record and then clothed it in layers of exciting production to more closely reflect some of the soundtrack work he’s been involved in recently. This approach leaves behind the familiar constraints of the genre and gives birth to a more unrestricted sound. Hell, there’s even a shredding guitar solo in the middle of this calm jam. Tripper, releasing August 2nd, is certainly set to make a big impact with critics. The previous Fruit Bats records have made friendly splashes with the folks at SPIN and Pitchfork, and based on what we’re hearing, this latest effort will only raise that bar!

This music video will dial your Flux Capacitor right into the 1980’s. Instead of trying to modernize the era, Fruit Bats employ all of its tackiness and clichés into one reproduction! Johnson sports a full blown Flock of Seagulls haircut as he makes his way through a montage of cheesy cuts and video transitions, while shining oh-so-brightly, mostly because of the added glowing white outline added into the footage. His band members do not shy away becoming victims of the time themselves, donning an extremely manly and rich mustáche. To top it all off there is the necessary video vixen, who wears signature white lingerie as if she has just stepped out from the filming of a certain Whitesnake clip. “You’re Too Weird” is a lovable piece of retro cinema that has enough hair-crobatics to satisfy all your nostalgic desires without ever goofing around musically.

Big props to Sub Pop for bringing us this must-see new video. Fruit Bats is currently on tour in support of their new record, opening for The Decemberists as well as headlining, so if you’d like a chance to see or interview the band, let us know. We’ve also got copies of Tripper coming our way so be sure to fill in your requests. If you need more info, call Andy Gesner at 732-613-1779 or e-mail us at info@HIPVideoPromo.com. You can also visit www.SubPop.com or www.FruitBatsMusic.com to find out more about Fruit Bats.