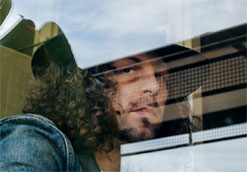 Jeff Gitelman – the multi-talented artist who records as Gitty – has contributed to some of the richest, wisest, deepest, most inexhaustible musical projects released this decade. You’ll find his name listed in the liner notes for J. Cole’s blockbuster 2014 Forest Hills Drive, the winsome, wildly creative Surf by Donnie Trumpet & The Social Experiment, A$AP Ferg’s provocative Always Strive And Prosper, Logic’s astonishingly ambitious The Incredible True Story, and many other albums that were hailed as instant classics upon their release. Most recently, he teamed with Camila Cabello to pen the aching “After All These Years” for her smash hit debut solo album Camila. This producer, arranger, guitarist, and songwriter has a resume that any musician – in any genre – would envy.

But Gitty isn’t just a force behind the scenes. He’s a budding star in his own right: a performer comfortable in the spotlight (and in front of the camera) and a singer with a voice sweet enough to carry a pop-soul song to the top of the charts. He’s also got a remarkable personal story – he was born in Chisinau, the capital of distant Moldova, and didn’t arrive in the United States until he was nine. The young Gitty, whose adoption of the English language was hastened by the pop and hip-hop records he loved, rescued his first guitar from the garbage. It was a fateful discovery. Gitty excelled as a guitarist, and his instrument took him to Berklee, and later to the backing bands for the legendary singer-songwriters Lauryn Hill and Alicia Keys.

“Karaoke”, his new single, makes his love for music – all music – manifest. The song has the same warmth, immediacy, and sophistication that listeners will remember from the landmark records he’s worked on. Gitty also gets some assistance from a pair of talented friends: Baltimore R&B vocalist Rose Gold, who steams up the chorus, and the Caribbean-American emcee Trinidad James, who swaggers through the second verse. Just like all of Gitty’s songs, “Karaoke” is an amalgam: it’s rap and art-rock, smooth jazz and R&B and island music, old-school soul and state-of-the-art pop, all at once. Gitty is a globe-straddler, and so is his music.

The crisply-shot clip for “Karaoke”, too, finds Gitty and his collaborators at the intersection of cultural traditions. He follows Rose Gold through the crowded streets of Los Angeles’s Chinatown and sings in front of the ornate arch of the Far East Plaza. But the action really takes off when he opens the front door of the karaoke bar and steps in. Gitty, Rose Gold, and Trinidad James all take their turns in the spotlight – as do some colorful locals. It’s a celebration: of love, of rhythm, and of music too good to be contained by borders or genre classifications.

Here at HIP, it’s an honor to be working with a multi-talented artist like Gitty for a visual as intriguing as “Karaoke”. We’re certain that you and your viewers will embrace this video and message as wholeheartedly as we have. Rest assured we’ll have plenty of outstanding Gitty merch to set up online/on-air contests and giveaways throughout the campaign so don’t be bashful about reaching out to get your hands on some. For more info on Gitty, please contact Andy Gesner and the HIP Video Promo crew at (732)-613-1779 or email us at info@HIPVideoPromo.com. You can also visit www.Facebook.com/JeffGitty for more info on Gitty.