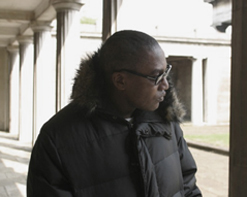 Greetings to all my fellow music video lovers! It’s Andy Gesner and the staff from HIP Video Promo, back with another intriguing clip from an artist who shows a liberating disregard for expectations and genre restrictions. Call him downbeat, call him trip-hop, call him reggae; hell, you could even call him classical if you wanted to. It won’t matter at all to Glideascope a musician without boundaries. The UK artist and producer has travelled the world, and the music he makes reflects his journeys. His is a near-spiritual quest for the roots of hip-hop and beat music, and his compositions draw connections between Afro-soul, European orchestral works, and film soundtracks.

Now, string samples have been hip-hop and downbeat standard for years. What makes Glideascope so unique is that his tracks aren’t crafted from loops: these are classically orchestrated string arrangements inspired by the rhythmic architecture of the songs. The title of his 2003 independent EP release says it all With Strings Attached. Glideascope’s empathy with classical musicians would be remarkable for a composer. For an electronic music producer, it’s positively unprecedented.

The critically acclaimed forthcoming album Audio Cinematography is similarly well-named: it is eighteen tracks of expansive, colorful, dramatic, and often beautiful music. Songs like “Road To Istanbul” and “I’m an Afropean” are virtual sonic travelogues; suggestive, allusive, and impressively multicultural. One of the reasons MIDEM (the world’s leading music conference) identified Glideascope as a buzz-band artist for 2006 and the album has been garnering 4 and 5 star reviews in the UK.

“Big Big Disgrace” described by Arjan Timmermans of the ArjanWrites weblog as “Mozart meeting Shabba Ranks meeting Groove Armada” and as “Dub Reggae with energy, downtempo style and orchestral strings” by dance industry bible DJ Magazine. This represents one of the most immediate and radio-friendly aspects of the Glideascope project. But make no mistake; “Big Big Disgrace” showcases everything that makes this artist so distinctive. Emcee Junior Ruff brings the fire, Glideascope provides the chilled-out but edgy arrangement, and the expressive string players of the Prague Philharmonic Orchestra add dramatic shading. Unsurprisingly, the subject matter is sober, Ruff reminds children to stay in school, and warns listeners about global warming and questions current policy on world poverty. There’s something stark and serious about the track: even when it bumps (and it does), the message remains paramount. It’s a seamless union between polemics and atmosphere, and one of the year’s most affecting protest songs.

Ever the courteous producer, Glideascope concedes center-stage to Ruff and the orchestra in the “Big Big Disgrace” clip. Elegantly dressed and impressively poised, the classical musicians assume chamber-orchestra position on a typical black box stage. (This arrangement is nothing new for Glideascope, who frequently performs live with a similar format). Meanwhile, Ruff addresses a rapidly-gathering audience of young listeners, who sit upright in polite attention, as would attendees at a classical concert. They are not, however, dressed like upper-class concert goers they’re just typical multi-cultural British youth, brought into the civilizing influence of the drawing room by the teachings of the emcee. Glideascope gently inverts the logic of empire by making the Jamaican rapper the guardian of culture and the voice of the edifying orchestra.

Glideascope himself is given pride of place, baton in hand, he conducts the orchestra. He’s the maestro, and while he doesn’t address the audience directly, there’s no question that he’s masterminded this event. Shots of Glideascope and Ruff in a musical class-room setting are interspersed with those of the unusual combo performing. Outlined in crisp black and white, the musicians are the height of genteel cool a pan-ational philharmonic dedicated to blurring the lines between the contemporary and the classical.

We are elated to be collaborating with Akara Music for this remarkable new video. As always, we have extra copies of theAudio Cinematography album available for all of your on-air giveaway needs, so please do not hesitate to be in touch. If you need more info, call Andy Gesner at 732-613-1779 or email us at info@HIPVideoPromo.com.