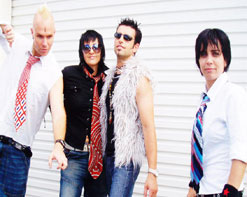 A big hello to all of my esteemed programmer friends! It’s Andy Gesner and the staff at HIP Video Promo. Here in the American East, we’re counting down the days until spring. But Down Under, it’s been summer for months – and in Brisbane and the Sunshine Coast of Queensland, where it’s 82 degrees and sunny, the party shows no sign of flagging. Singer, synthesizer player, and programmer Grainger K. Lock is a Queensland musician, and there he learned how to keep the dance floor hopping. Vocalist Mishka hails from hipster Melbourne, and adds pouty mystery, black-leather toughness, and international chic to Lock’s irresistible club grooves. They call their collaboration Glovebox – and it’s been burning up Australia ever since the 2005 release of their eponymous, retro-dayglo debut on Baria Records.

Baria has established itself as one of the most prescient indies Down Under, and Glovebox has rewarded their faith by becoming a consistent draw on the Australian concert circuit. But we’ve got good reason to believe that their appeal transcends continental limitations: in 2005, Glovebox was awarded Best New Duo by Hollywood-basedNew Music Weekly. “In The End”, their first single, received solid stateside airplay in advance of the debut CD. But even if their initial forays into the American marketplace hadn’t been successful, we’d still be bullish about Glovebox. The band looks terrific, their songs are maddeningly infectious, the live version of the group (complete with an ace rhythm section) can bring the goods, and they’ve perfected that eighties-nineties electro-rock hybrid that has become a near-guarantor of modern alternative radio hysteria.

“Superstar”, the latest Glovebox single and lead track on their album, is the group’s sweetest confection yet: a new wave revival song that echoes Human League, Animotion, Berlin, Missing Persons, and scores of lesser-known (but no less accomplished) early-Eighties punks with synthesizers and a knack for a grimy-industrial pop tune. Lock laces a low guitar pattern and a synth riff over a stomping beat, and adds occasional breaks, twists, and musical interjections. But it’s Mishka who really sells the song – her smiling put-down on the chorus is engagingly standoffish, and sexy enough to make an undeniable pleasantry out of its roughness.

Established Australian cinematographer and producer Rohan Zerna directs the clip for “Superstar”, and presents Glovebox as a group with attitude and energy to burn. The band looks terrific: Grainger K. Lock and guitarist Morris rock outrageous threads and wild haircuts with the casual ease of nightclub regulars, drummer Sair peers up adorably from her stool, and Mishka, playfully confrontational, stares down the camera like Justine Frischmann at her most enticingly arrogant. The band plays on the boardwalk, under the bright Australian sun, in front of a fish and chip shop – still going strong, perhaps, after a wild night in the Sunshine Coast discos.

But the star of the “Superstar” clip isn’t a member of the band. It’s a bald, pudgy sixty-something dance music fan who dances around his flat like a kid. We watch him groom and get dressed, and slip his dentures in – but once he’s fully and nattily attired, he’s ready to go. Mishka’s face appears on an old television monitor in his living room, but upon closer inspection, it become apparent that she’s broadcasting from within the apartment. How intimate is the band’s relationship with their aged fan? Quite, apparently, considering the last shot – the caped “superstar” sharing the mic with Mishka, broadcasting the chorus to the Queensland boardwalk.

We are thrilled to be working with Eugene Bari of Baria Records to bring you the latest club hit from Glovebox. We will have plenty of copies of Glovebox for on-air giveaways, and the band is planning a US tour so if they are coming through your area and you would like to set up video interviews or IDs, don’t hesitate to get in touch. If you need more info, call Andy Gesner at 732-613-1779 or e-mail us at info@HIPVideoPromo.com .