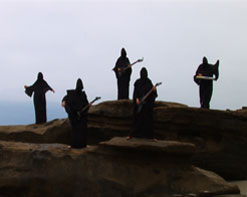 With Halloween right around the corner, boy do we have just the clip for you! It’s Andy Gesner and the staff here at HIP Video Promo with another indie video that completely deserves your attention. Their album cover – featuring a pointy-eared and well-endowed humanoid seated in banded armor on a fiery throne – looks like something that might have been done by Celtic Frost or Manowar in 1984. The bandmembers have names like Lord Phallus, King Sith, and Loki Sinjuggler. Bagged And Boarded, the debut, contains songs called “Kegrah The Dragon Killer” and “The Revenge Of Snufalufagus”. Yes, this is Goblin Cock: black metal done with a wink, good humor and better musicianship, and clear affection for the form.

It all becomes clearer once you check the liner notes: Goblin Cock is one of Pinback co-founder Rob Crow’s many musical projects. And while there isn’t much overlap between black metal mania and the cool, controlled indie rock of Pinback’s Summer In Abaddon, it’s not impossible to see the imprint of Crow’s other work through the sturm-und-drang. As Crow has proven for years, he is such a good writer that it barely matters what genre he’s working in: he’s going to give his audience songs that are well-structured, memorable, and built to last. Much of Bagged and Boarded might be tongue-in-cheek, but the technical excellence here suggests that Crow harbors both deep knowledge and genuine love for Nordic black metal. The distance between D&D players and indie music aficionados is negligible, and Goblin Cock straddles the gap with ease.

If there was any question about whether hipsters have a secret yen to grab broadswords and slay orcs, the buzz surrounding the release of Bagged and Boarded ought to put the question to rest. Lately it seems that every major music weblog on the ‘net is madly anticipating the release of the Goblin Cock record. Certainly the outrageous album art has helped. But those who have heard “Stumped”, the advance single, have quickly recognized that Crow’s latest project is more than just a tribute act or retro joke. The track is a chugging, churning, powerful piece of metal authenticity that charges out of stereo speakers like an axe-wielding barbarian.

The video for “Stumped” will do nothing to blunt the Goblin Cock mystique. Like Bagged and Boarded, the clip somehow manages to be simultaneously cryptic, threatening, and hilarious all at once. The band appears shrouded in black robes: they play their instruments in formation atop a rock jetty. But if there’s something terrifying about the image of Lord Phallus and company glowering down at the camera from their command position, they appear a little more ridiculous when transplanted to a comic shop. Later, they hike up their hemlines to take a walk in the ocean; still hooded, they come ashore to a stagehand who gives the Lord a guitar just in time for a raging solo. If that isn’t enough to push the “Stumped” clip straight into delirium, the band also has a run-in with a very dangerous-looking women’s softball team. Dressed in executioner’s hoods in the stands of a local park, their relationship to the players is deliberately left unclear; then, chased through back alleys by the uniformed high school girls, they’re cornered and placed in obvious jeopardy. Only the intervention of tinfoil spacemen buys them time – and suddenly we cut back to the comic shop, where a teenager, disgusted by the sustained improbability, dumps his issue of Goblin Cock into the trash.

We are very excited to be working with our new friend Cory Brown at Absolutely Kosher Records to bring you this new hard rocking clip from Goblin Cock. We have plenty of copies of Bagged and Boarded and other goodies for on-air giveaways. In our attempt to get you more excited than you already are, every time the “Stumped” video gets played on your program you will be entered in the “Get Your Fill Of Goblin Cock” contest! The winner will be receive CD copies of the entire Absolutely Kosher catalog (lots of good stuff here, The Wrens, Pinback, etc.), along with Goblin Cock t-shirts and cool full-colored uncensored posters. The drawing will take place on December 12th. Goblin Cock is also touring and would love to do video interviews and ID’s, but only in character and in full costume! If you need more info call Andy Gesner at 732-613-1779, or email info@HIPVideoPromo.com.