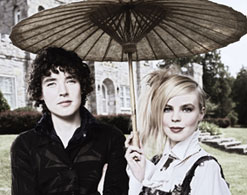 Greetings, everybody, it’s Andy Gesner and the staff from HIP Video Promo. Summer’s almost over, but great dance tracks from European bands keep bringing the heat to these shores. A new generation of thoughtful cutting-edge auteurs now control the dance floors, and the level of creativity in the clubs across the Atlantic has rarely been higher than it is right now. The Green Children epitomize the spirit of this new wave: their tracks are relentlessly creative, but also winningly poppy. You can get down to their stuff, or you can listen to it with headphones on; this is music that feeds minds even as it compels listeners to move their feet.

The group’s peers agree. Legendary house music producer Paul Oakenfold has already remixed “Dragons,” the first single from their debut album Encounter, which drops October 12th on Spinside Records. One listen to the Green Children track and it’s immediately apparent why Oakenfold chose to work with their music: “Dragons” is hypnotic, evocative, propulsive, and very catchy. It seems like a transmission from slightly different, and more interesting universe: a club cut from a cooler planet. Which brings us, in a roundabout way, to the story of the Green Children — a centuries-old fable that young musicians Milla Sunde and Marlow Bevan are ready to extend.

Deep in the Middle Ages, a brother and sister appeared in the Anglia countryside. Nobody knew where they came from, or why their skin was entirely green. The brother died, but the sister learned English — and as she did, the green color faded from her face. She told anybody who would listen that she and her sibling had come from another world, one deep underground, and that she was an alien to the earth’s surface.

The clip for “Dragons” resurrects the tale, and adds to it new dimensions. The fetching Milla Sunde plays the sister, and Bevan is cast as the spirit of the lost brother whose failure to assimilate may have cost him his life. Sunde, an adult, sings from bed; she, too, has fallen ill. Tormented by guilt and bewilderment, she staggers in a fever-dream (one haunted by images of Bevan), and collapses in a pretty heap on the floor.

When she opens her eyes, she’s transported to a strange realm: an enchanted forest carpeted by leaves and decorated by the thin green trunks of narrow trees. Sunde’s costume is completely different here, too. Her drab bedclothes discarded, she wears bright pink eye makeup and a flowing red dress. Has she rediscovered her faerie identity? Is this a glipse of the mythic green world that the brother and sister left for our own? But even here, Bevan proves elusive: Sunde charges at him, only to watch him vanish. The “Dragons” clip culminates with its most arresting image — a fully clothed Milla Sunde walking to the edge of a lakeside pier and plummeting, calmly, into the water’s depths.

We’re pleased to be working with Jimmy Brunetti and the good people at Croshal Entertainment Group, as well as Spinside Records to bring you this captivating new clip. If you need more info, call Andy Gesner at 732-613-1779 or e-mail us at info@HIPVideoPromo.com. You can also visit www.SpinsideRecords.com or www.TheGreenChildren.com to find out more about The Green Children.