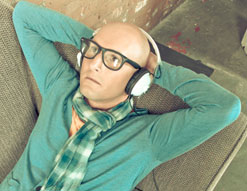 Hello programming friends, it’s Andy Gesner and the HIP Video promo staff with a sugary pop clip that is as humorous as it is instantly catchy. Say hello to the electronica meets rock rising pop sunshine that is Greg Lato. “Just Another Goodbye” will make you laugh, it will make you move your body, and totally throw you for a loop at the end! Taking hints from 80’s pop, Greg Lato does not waste precious seconds without giving you a hook to hold on to, leaving an immediate and lasting impression.

“Just Another Goodbye” grooves with an R&B and pop drum 808 beat, while rooting itself lovingly to the precious melodies of modern pop rock. This creates a sound that is both, fresh and familiar; staying catchy without being too repetitive. Greg Lato can easily stand tall alongside contemporaries like Cobra Starship and Metro Station, keeping the party grooving and the crowd singing along.

The video for “Just Another Goodbye” takes place in the form of a dinner party at a mansion where a voluptuous vixen woos men into getting hurt in the most hilarious ways as they compete for her attention. Lato takes on a “Nutty Professor” style role as he plays all the characters in the clip, with the exception of the girl. As the men get electrocuted, drowned and eliminated, the real Greg Lato realizes that there is something terribly wrong with the girl that everyone’s been chasing and dashes out of the house. Turns out his suspicions were correct, the girl unmasks herself in the end, revealing herself to actually being a buff and brutal man! The clip is racy, funny, and twisted, providing a great background to the catchy tune.

Greg Lato has been stirring quite the storm for himself as of late, garnering attention from his previous releases leading up to his brand new album Do The Best With What I Got, produced by Jim McGorman, musical director for Avril Lavigne and Weezer. Lato has recently graced the television screens with performances and interviews on FOX’s The Rhode Show, NBC Channel 10 News, Wicked Late w/ Brendan Kirby in Rhode Island and The Steve Katsos Show. Lato claims that Do The Best With What I Got “has some of the best songs I’ve written to date. It’s more of a fun, upbeat record but with substance, reminiscent of everything I love about ’80s pop.” Coming from a man of musical experience and pop sensibility, Greg Lato is ready to win over waves of fans.

Everyone here is very excited to champion a clip that will bring you and your viewers an instantly memorable melody along with buckets of laughter. Greg Lato has been kind enough to provide us with lots of copies of Do The Best With What I Got for your listening pleasure and on-air giveaway contests. If you need more info, call Andy Gesner at 732-613-1779 or email us at info@HIPVideoPromo.com.