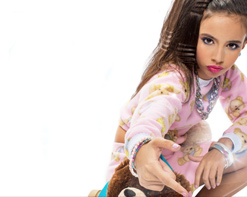 What were you doing when you were 10 years old? Probably barely surviving 4th grade and worrying about getting home in time for after school cartoons, right? Hello Kylie, however, isn’t like most kids. This self-proclaimed lover of “all things Disney” hosts one of the hottest YouTube channels on the web, which has included guests such as Pentatonix and Jordyn Jones. She currently sits at over 45,000 subscribers, racking them up by creating a unique variety show with music, guests, and a little bit of comedy.

On the heels of this popularity, it is only natural for Hello Kylie to take the reigns and flex her own musical muscle. She does so with the brilliantly fierce new single, “Sleep Is For Suckas.” It makes perfect sense, really, having literally grown up in the entertainment industry. Her father is a record producer who’s worked with artists from Ariana Grande to Beyonce. Her mother is a professional rhythmic gymnast who represented Venezuela at the Pan Am Games and later worked as a dancer/choreographer on stage and in television. She herself was a baby model for Tommy Boy Records, began acting at 5, even receiving radio airplay at 3, when her cover of Rihanna’s “Rude Boy” was playing in Venezuela.

In “Sleep Is For Suckas,” she attacks the mic with authority, making sure there is no doubt who the boss of her world is. Ripping off lines like “Got a game so sick you nose get runny” and “I got a vegetarian piggy bank, it’s only eatin’ green” show that this petite pop singer packs quite the punch! She’s gifted beyond her years, and pushes out a sound that could pump a pulse back into a corpse.

We’re really happy to be a part of the Hello Kylie team. She’s charming, she’s sassy and she’s on the fast track to stardom, with “Sleep Is For Suckas” being a big step in that direction. Please don’t be shy about letting us know what we can do to help get this video into your programming. You can contact Andy Gesner and the HIP Video Promo team at (732)-613-1779 or email us at info@HIPVideoPromo.com . We also highly encourage you to check out the Hello Kylie YouTube channel at this link: http://www.YouTube.com/channel/UCUH8EWHZQ5vOOrcOF-pjr4A/.