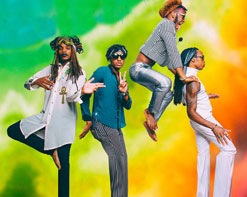 It may seem as though every hero has a quest. Some save a princess from a fire breathing dragon, others save the world from a nemesis determined to cause destruction. Hero The Band has a different quest and that is to touch and inspire lives through their musical talents and sound.

It truly is a “family affair!”- Four blood brothers, multiple musical talents, and one big dream are the motivating factors that keep this band steadily moving toward a successful music career that touches lives around the nation and world. On their new album, Bleach, the four brothers go all in and unleash a collection of songs that are rock and roll in their energy, pop in their prowess, and even a touch of gospel in their passion. Today, we’re pleased to bring you three videos for your programming consideration, “Give It Away,” “Fool’s Gold,” and “REM Deep!”

“Give It Away” is an ambitious and uplifting clip that kicks the energy into high gear from beginning to end. Revolving a summer pool party, the good times never stop as the band lifts the spirits of the partygoers turned audience. A few subtly creative visual tricks enhances the experience and all parties involved are eating it up! There’s also a few bonafide moments of being trues heroes! This should come as no surprise as the song is one of the most uplifting and exciting jams we’ve been a part of in a very long time.

The “Fool’s Gold” video is nothing short of a retro throwback of epic proportions. Get this… The video tells the story of a roller derby competition called The Ballamont Games, which takes place at the Fool’s Gold Arena. Of course, the competition is as brutal as you’d expect, but it’s actually… different. It’s half-party, half-battle, but all amazing fun. Of course, we’d be remiss to not mention the slew of outlandish wardrobes that come close to stealing the show. If you don’t believe us, take a look at the pseudo-superhero outfits that the band is sporting as they provide the soundtrack!

With the help of guest vocalist Kyra Korchak, “REM Deep” allows the band to expand their creativity to a whole new level of expression. The laid back vibe and atmospheric delivery plays gracefully on the concept of creating space and a slow burn. For the bulk of the song it’s as much about what isn’t played, rather than trying to fill every sonic crevice. But when it hits, watch out because it’s powerful! For the “REM Deep” video the band has embraced the galactic nature of the song and set the clip deep in outer space. As these musical spacemen journey into the unknown a kaleidoscope of colors saturates the screen with a collage of images and visuals that captivate and mesmerize.

All of us here at HIP Video Promo are incredibly excited to share these videos with you and hope that you’ll embrace this band as deeply as we have. Please get in touch with Andy Gesner and the team here at (732)-613-1779 or email info@HIPVideoPromo.com . You can also visit http://www.HeroTheBand.com/ for more info.