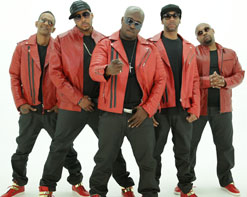 The early 90s were a dynamic time for R&B music. Many artists rose to mainstream stardom with a sound unlike anything else on the airwaves of the day. Artists like R. Kelly, Boyz II Men, Jade, Jodeci dominated the charts. Right amongst them was the Waco, TX-based quintet Hi-Five with their smash hit “I Like The Way (Kissing Game),” which hit #1 on both the pop and R&B charts. Their eponymous, platinum-selling debut on Jive Records, as well as follow-ups Keep It Goin‘ On and Faithful, set the scene on fire, and still finds singles like “I Just Can’t Handle It,” “Unconditional Love,” “I Can’t Wait Another Minute,” “She’s Playing Hard To Get,” “Quality Time,” and of course “I Like The Way (Kissing Game)” in regular radio rotation.

Eventually disbanding, they left behind an impressive legacy. After many years and a series of tragedies that include the tragic death of founding member Tony Thompson in 2007, Hi-Five was reborn in 2012 by original members Treston Irby and Marcus Sanders, longtime member Shannon Gill, and a fresh injection of talent by way of Faruq Evans and Billy Covington. Now based in NYC on Irby’s Bronx Most Wanted Entertainment, the group is ready to show off this incarnation to the world. With their brand new single “Kit Kat,” the group has reminded all us beyond a shadow of a doubt that no amount of adversity or time away can suppress their unbridled talent. With a sound that is as timeless as it is contemporary, “Kit Kat” eagerly celebrates the beauty of being a giver under the sheets.

The “Kit Kat” video delivers exactly the kind of sultry, sexy vibes that we have come to expect from Hi-Five. As each verse is delivered one by one, a scene plays out with the lyrics coming to life in the most vibrant, sensual kind of way. First it’s Billy, then Faruq, Marcus, Gil and Treston each get in on the action, delivering the goods in their own unique way. The lucky ladies are showered with affection and given a night they won’t soon forget. Meanwhile, against a white backdrop, the quintet serenades the camera with passionate conviction, showing that they have all the right moves both on stage and behind closed doors.

A huge thanks to Hi-Five and the entire Bronx Most Wanted crew for letting us be a part of this dynamic rebirth! We’re confident that this incarnation of Hi-Five faithfully preserves and grows the legacy, and are hopeful that the “Kit Kat” video will find itself in your programming far and wide. Please contact Andy Gesner and the HIP Video Promo team at (732)-613-1779, email us at info@HIPVideoPromo.com. You can also visit www.BXMostWanted.com for more info on Hi-Five.