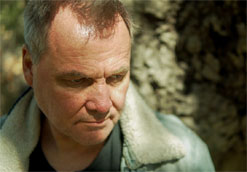 Capturing the transcendent spirit of brotherly love like no other song in recent memory, Hugh James’s compelling new gospel-soul single and video “My Brother’s Shoes” is a stunning and heartfelt reminder to all of us not to judge the lives of others.

Originally from Garwood, New Jersey – a 40-minute bus ride from New York City – Hugh James started playing piano at the ripe old age of 5. He began jamming in garage/basement bands as a kid and soon started putting words and music together. He went on to study piano and composition at the University of Miami, before laying down roots in Los Angeles. Once there he developed a multi-faceted career in the music industry, including penning songs for Tiffany and Steve Holy, recording and performing live with the likes of Michael McDonald and BJ Thomas, placing songs in numerous films, and holding court as the Featured Pianist in Residence at Disney’s Grand California Hotel.

Hugh was inspired to write “My Brother’s Shoes” in the wake of the passing of his brother Doug in 2014, who had fallen on hard times. The headline of the newspaper story about Doug’s life and death (dateline: Lakewood, NJ) read, “From waterfront home to Tent City; homeless man dies after long battle with alcohol.” Once a successful contractor, Doug was found in Tent City wearing a red shirt and hospital socks – no shoes to be seen, leaving Hugh asking everyone from total strangers to Jesus for clues, on “My Brother’s Shoes.”

Hugh says that although Doug was the inspiration for the song, “it’s not about MY brother – it’s about your brother, it’s about all of our brothers, it’s about all of us.” From the haunting piano melody to the rousing background vocals and rolling drum beat, the music – which features legendary pedal steel guitarist Jay Dee Maness (well known for his work on Eric Clapton’s “Tears in Heaven”) – sets a backdrop for the listener to connect to this true-life moving story.

Now, he’s shared the video for “My Brother’s Shoes.” Directed by Alan Marino, the video combines raw 8mm footage shot by James and his son Nevada, along with a multi-generational gospel family from North Carolina called 3G. Hugh also chose to film in Ventura, California, since that’s where he was when he got the news.

It’s a true honor to work with Hugh James to share the true-life story that is “My Brother’s Shoes.” We would love to see this clip included in your programming and online presentations in a timely fashion. Rest assured we’ll have plenty of Hugh James merch available for on-air contests and giveaways, so don’t hesitate to get in touch. Please contact Andy Gesner and the HIP Video Promo team at (732)-613-1779, email us at info@HIPVideoPromo.com. You can also visit www.hughjamesmusic.com for more info on Hugh James.