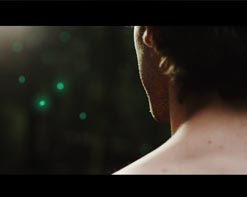 Formed in early 2014, IDYLL is a transcontinental collaboration between two artists seeking to combine elements of their distinctive pallets into a new, transcendent sound. A partnership of The Cautious Arc’s Joseph Vitterito of the US and Benjamin Gustafsson of Sweden ended up with a sound that helps define Vitterito’s own progressive, eclectic label Anticodon Records, who describe themselves as “a haven for the artistic savants who refuse to be bound by convention: experimenters in the leftfields of sound and vision.” IDYLL’s debut single, “Paradisal”, fits the bill with a sound that defies genres, subtlety blending fragments of electronica and pop. HIP Video Promo is very pleased to present the strange and enchanting video for IDYLL’s “Paradisal.”

The track begins with gentle waves of noise giving way to a mellow electronic beat. Then, over a minute later, vocals enter the mix on top twinkling piano. “Feet steady / ready to run / the dream has already begun.” As the sound seems to achieve a state of weightlessness, the vocalist sings “I’m falling, falling, falling, falling upward,” before the track opens up into its climactic chorus. “The dream catches the blood in my veins,” he sings. And you can’t help but get swept up in IDYLL’s dream as well. It’s beautiful, overwhelming, and–much like a dream–it’s fleeting. The track seems to end too soon, defying expectations, as the beat slowly comes apart, and a swell of synthesized horns awaken you from its spell.

The mystical video–produced and directed by Lexi Kiddo and featuring Chloe Culhane and Ryan Cloud–perfectly captures the dreamlike vibe of the track. It begins with a tracking shot along the forest floor rising up to the trees, as the sun pierces through their branches, threatening to wash out the view. Deeper into the forest we go until we meet a handsome young man walking along as if in a peaceful trance. Next, we see him at an earlier time. He is bandaged, wounded, and unconscious. A mysterious, beautiful woman is kneeling over him. She paints a series of symbols and characters on his torso and seems to make an appeal to the gods. We then see the man walking again as before. He examines himself and sees a the forest around him fill with floating green orbs. Are they spirits? Has he transcended to another plain? Have you ever had a dream you wanted to revisit? This video captures that feeling. And you’re welcome to revisit “Paradisal” as often as you’d like.

For more information on IDYLL and their beautiful new video, please contact Andy Gesner and the HIP Video Staff at (732) 613-1779 or e-mail info@HIPVideoPromo.com .