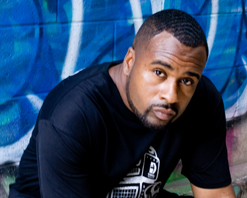 Greetings fellow music lovers, it’s Andy Gesner and the staff from HIP Video Promo, here today with a brand new clip from a Canadian emcee with an international message. The world’s favorite emcees are those who can manage to be aggressive and endearing at the same time. The best rappers can inspire with a put-down, and educate with a threat. For years, the knock on the independent rap underground has been that its voices aren’t boastful enough – they’ve got plenty to teach, but they lack the glowering charisma to excite. Well, Jair Dynast isn’t having any of that. Although his message is socially conscious and his diction is distinguished, he’s as brash and big-voiced as any of the mainstream emcees. “Whoever said the indie scene ain’t got no swagger must have lost their minds”, Dynast tells us on “My Style”, his latest single.

He backs up his boast with three minutes of verbal fire. On the mic, the Caribbean-born Jair Dynast is deft when he needs to be, and he’s got a way with a clever pop culture reference (here rhyming “memorize my quotes” with “Usain Bolt”.) But mostly he plays it rough, rapping in a throaty growl that is simultaneously arresting and engaging. He commands attention, and he’s not afraid to educate his listeners or call out other emcees for their irresponsibility. On “My Style”, he talks about his threads – but it’s a much deeper track than it initially seems. Dynast contrasts his relaxed street fashion with that of other rappers who are “still rocking conflict ices”. “Your wardrobe is a major crisis”, he tells his diamond-studded peers. Jair Dynast rapper buys local – supporting community businesses, reflecting pride in his urban upbringing, and looking stylish.

It’s the sort of message that underground rap fans have come to expect from the formidably intelligent Dynast. “The Art Of Invention”, his last single, extolled the accomplishments of black scientists and African-American technological pioneers. Yes, insists the emcee, black visionaries created rock and roll, blues, and soul, and we’re all familiar with those epochal musicians. But what of George Washington Carver, Benjamin Banneker, Patricia Bath, and other African-American inventors whose names are too often forgotten? A perfect song for Black History Month, “The Art Of Invention” resonated strongly with Toronto’s educators – and Jair Dynast was asked to perform the track at city high schools. The discussions after the performances (led by Dynast himself) were, by all reports, every bit as illuminating and invigorating as the music.

On his singles, Jair Dynast sounds imposing – his is a voice that could only come from an authority. Onscreen, he’s every bit as commanding: broad-chested, muscular, bearded, roughly handsome. The Engineer’s clip for “My Style” shows off some of the swagger that the rapper boasts about: Jair Dynast is comfortable in front of the camera, and he speaks directly to the viewer. Of course, he lets his clothes do the talking, too – and he’s brought some of his best and most representative threads to the video shoot. Dynast rocks pure street fashions: white tees with intriguing insignias, big sunglasses, simple necklaces, camouflage hats, and a fantastic hoodie that appears to have been designed by a graf artist. His clothes are unmistakably hip-hop and thoroughly fresh – yet they’re just as clearly inexpensive and identifiable. Shop at independent stores, the emcee demonstrates: you’ll look great, you’ll feel good about yourself, and there’ll be more in your wallet, too. A message for our times.

We’re very excited to be working with Hazel and the good folks at eMultimedia Group to bring you this fantastic new clip. We’ve got plenty of copies of Jair Dynast CDs available for your on-air giveaway needs, so please be in touch if you’d like to get your hands on them. If you need more info, call Andy Gesner at 732-613-1779 or e-mail us at  info@HIPVideoPromo.com . You can also visit www.JairDynast.com to find out more about Jair Dynast.