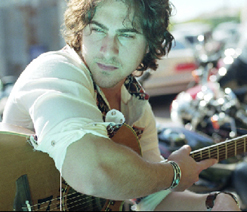 Greetings and salutations! It’s Andy Gesner and the staff from HIP Video Promo, back with another intriguing video from a new and exciting independent artist. Singer-songwriter Jared Sagal has emerged from the competitive Los Angeles club circuit with a debut album bound to distinguish him from his peers. The young guitarist has an unerring ear for a pop hook and a way with a telling detail, and he’s assembled a talented band to play his infectious melodies. Fans of Howie Day and Gavin DeGraw are sure to fall in love with Say It, his thoughtful recent release. Sagal’s honesty and refreshing commitment to forthright expression are rare commodities in contemporary singer-songwriter music.

Sagal’s six-string underpins almost all of these radio-ready cuts, but the arrangements on Say It are more elaborate than what we’ve all come to expect from guitar-slingers. Sweep strings, elastic bass, big beats, delicate backing vocals, Mellotron and synth horns frame the songs and add color to Sagal’s storytelling. His tales are romantic, steeped in heartache, but often hopeful; in “Walking At 5AM”, the album’s ruminative track, the madness of the world falls away at the sight of his lover’s face. Other tracks are more conflicted – “The Scarf” is a poignant offering to a young woman in need, undercut by a strain of desperate insecurity. Sensitively produced by Steve Plunkett of cult-rockers Autograph, Say It supports Jared Sagal’s everyman voice with music that is rich, powerful, and occasionally even glorious.

The title track is an undeniable high point. “Say It” is directed at a playgirl – a plea from a big-hearted boyfriend tired of being on the receiving end of the booty calls. Sagal and his band build to a huge chorus with a singalong melody worthy of vintage Tom Petty. Many of the musicians on this cut also played on Alanis Morissette’s Jagged Little Pill, and it shows – it’s played with the same combination of poise and abandon that characterized the blockbuster hits on that album. Streaming in on a wash of synth and ending amid a crash of guitars and cymbals, this is state-of-the-art emotional L.A. songwriting.

Dave “Yarvo” Yarovesky is another young SoCal artist making a name for himself.  He’s worked on videos by Good Charlotte, Jurassic 5, and the All American Rejects, just to name a few, and his hilarious short A Funny Thing Happened At The Quick Mart was a hit at film festivals on both coasts. Yarvo has done action/skateboarding films, too, and has worked with some of the hottest young talent in Hollywood, but he took some time out of his schedule to shoot an arresting clip for “Say It”.

The video opens with a shot of Sagal in his bedroom, looking reflective and coping as best as he can with a zealous girlfriend. Yarovesky flips the “Say It” story, putting the protest in the mouth of the sexy woman; she whispers the lyrics in Sagal’s ear. When the singer fails to respond, she takes desperate measures – tying him to a chair, and holding his head underwater. Teasing out the obsessive implications of Sagal’s scenario, Yarvo explores an unrecognized dimension of the song, and makes a few points about the dangers of romantic love along the way!

We’re pleased to be working with Mark McCammon and his crew at Identity Music to bring you this clip. All of us here at HIP really believe in this new artist and we’re confident you’ll agree that he is worthy of a wider audience. And he even has a follow up video on the way for his song “Over It” straight from the Say It album to boot! We will have an abundant stock ofSay It CDs to meet all of your give away needs. If you need more info, call Andy Gesner at 732-613-1779 or e-mail us atinfo@HIPVideoPromo.com.