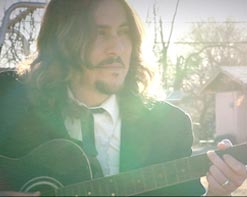 When figuring out the best way to describe Jared Sagal, you know that we are going to tell you all about his music. Those of us who remember Jared’s last single for “Say It” are familiar with his songwriting prowess and his unmatched talent as a performer. But that’s not all this self-proclaimed Rockerrazzi can do. He’s also a gifted photographer, graphic designer, and most importantly an accomplished music video director. Earlier this year we brought you the Sagal-directed videos for “Shut You Down” by Galvanized Souls and “Country Love Song” by Kailey Swanson. Now we are proud to bring you Sagal’s own video for the timeless track “You Are My Sunshine.”

Perhaps it’s only appropriate that an artist like Jared Sagal, with so many sides to his craft, would pick one of the most covered songs in history to put his own spin on. Originally made famous in 1939 by both Jimmie Davis and The Pine Ridge Boys, the song has been covered by such famed artists as Gene Autry, Bing Crosby, Ray Charles, Johnny Cash, Brian Wilson, Aretha Franklin, and on and on and on! In 2013, the Library of Congress added the original Davis recording to the National Recording Registry for long-term preservation. Over the years, the song has lost much of its country music identity, taking on all genres and sounds since. Maybe we’re a little biased, or maybe it’s the incredible video that accompanies it, but we think Jared Sagal’s gloomy and grandiose take on the song is one of the best we’ve ever heard.

The video show in what could be any rundown old town, with its decaying cinder block homes, rusting playgrounds, and unkempt appearance. The imagery of an empty vintage baby carriage rolling down the road is particularly eerie, especially juxtaposed with a tearful female in a wedding dress with mascara running down her face. The broken down collection of dolls and child toys also adds to the mystique as we the viewer try to figure out what’s really happening here? What is it that drives this woman mad? A spinning 45 of the song and Sagal’s serenading are the more comforting elements of the song, but it is certainly a creepy clip worth digging into over and over!

We are incredibly pleased to be working with Jared Sagal on the music side of things again and are here to do anything we can to get this video into your programming! For more information on Jared Sagal and all of his creative projects, please contact Andy Gesner and the HIP Video Staff at (732) 613-1779 or e-mail info@HIPVideoPromo.com. You can also visit www.Rockerrazzi.com for more info.

For info about Jared Sagal’s “Say It” video, click HERE