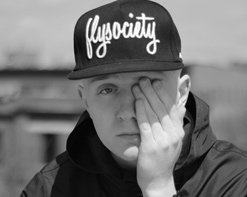 Jay Gudda has a lot to say and he’s damn sure that his new video for “The Reset” is just the sort of edgy, unhinged jam that will leave it’s mark. Born in the blue collar town of Peabody, MA, Gudda has been pushing hard with his unapologetic brand of hip hop. He’s true to the art, the hustle and to displaying his natural talents, rather than cloaking himself in flashy gimmicks or cheap attempts of fame that infects so many artists on the scene.

While the Boston metro area and New England aren’t usually at the top of the list of hip hop scenes, Gudda has been establishing himself as one of the fiercest emcees on the eastern seaboard through a combination of touring, mixtapes, and good old fashioned grind. The noise he generated recently caught the attention of the legendary R.A. the Rugged Man, who brought Jay Gudda on the road with him. Just take a peek at Jay’s Facebook wall and you’ll see an abundance of newly converted fans who were scorched by his opening slot. As expected, “The Reset” is given props by many of them.

The video finds Jay Gudda patrolling the halls of an abandoned complex in Grafton, MA. He patrols the halls like apparition, haunting not just the rooms around him, but also calling out a slew of naysayers from his past. Nobody is immune to his fire as he tells it like it is. In a mixed display of regional pride and open defiance, he dons a New England Patriots jersey sporting the number 81, which belonged to the infamous Aaron Hernandez, the former player recently convicted of first-degree murder. Don’t like it? Too bad, Jay Gudda isn’t one in this game to make friends.

We’re excited to be working with Jay Gudda and his new video for “The Reset.” We are here to hook you up with whatever you may need to get this video into your programming, so please get in touch with Andy Gesner and the HIP Video Promo team at (732)-613-1779 or email us at info@HIPVideoPromo.com. You can also visit www.Facebook.com/WhoIsJayGudda or www.Twitter.com/WhoIsJayGudda for more info on Jay Gudda.