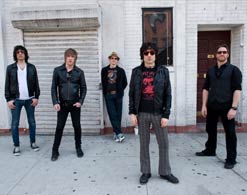 Get ready to rock and roll programming kings and queens! It’s Andy Gesner and the HIP Video music video force, here with a high profile clip that will eat up your airwaves. New York City’s resident punk rocker Jesse Malin returns to follow up last year’s “Burning The Bowery” with the explosive, carefree “Disco Ghetto” from the critically acclaimed Live It To Life album.

Malin is a staple of New York City’s punk rock scene. Jesse Malin is responsible leaving one of the first marks on NYC’s hardcore scene thanks to his band Heart Attack. He also fronted D Generation, who opened for legends KISS and The Ramones. D Generation’s No Lunchis considered a garage rock classic, hitting way before the revival scene took off. Malin has also worked with Ryan Adams, Jakob Dylan, Billy Joe Armstrong, and Springsteen. In fact, Armstrong joined Malin on stage just a few months ago, and let’s not forget Malin’s song “Broken Radio,” which features The Boss himself on the mic!

Jesse Malin never lacks cool star power, which is why he employed the beloved Weeds and Broadway actress Mary Louise Parker is the main character in the new “Disco Ghetto” video. Parker plays a waitress that is constantly sexually harassed by her customers (not too far off from her Weeds role) and eventually dreams of escaping her problems by dolling up and going to a raging Malin show, where everyone is on a mission of hedonistic self-pleasure and sweaty dissolution. Clad in denim and leather, Malin is at the center of it all, like a pagan god, guiding his minions in the ritual of celebrating the night away.

Always poetic, never sacrificing substance for surface is the mantra that Jesse Malin seems to hold most closely to heart. “Disco Ghetto” is an upbeat and catchy little number, but like his idols, he always puts the lyrics first. The tune is all about going out to shows and dancing as a way of temporarily forgetting about the burdens of living in the middle of a recession that never seems to end. The song has struck a chord with Rolling Stone, who instantly joined in to premiere the clip. Jesse Malin is currently busy supporting the release touring North America and Europe from now and through the fall to breathe power intoLive It To Life.

We are thankful to SideOneDummy for once again bringing us onboard to represent this veteran punk rocker. It’s a true honor to be a part of the Jesse Malin team and are here to hook you up with copies of Love It To Life for your on-air giveaway needs. If you need more info, call Andy Gesner at 732-613-1779 or e-mail us at info@HIPVideoPromo.com. You can also visit www.SideOneDummy.com or www.JesseMalin.com to find out more about Jesse Malin & The St. Marks Social. Be sure to let us know if you would like to see the band live or invite them in for an interview along their route!