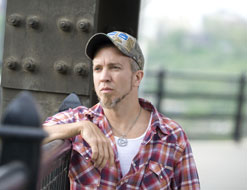 Greetings programming friends, it’s Andy Gesner and the staff from HIP Video Promo, here with a brand new video from a bold American voice. JJ Grey speaks the language of soul. His music is steamy, swampy, passionate; on the mic, he testifies with rare conviction. The recordings he has made with Mofro, his top-flight Jacksonville blues-rock outfit, are the closest any music fan is going to get to the glory of Stax-Volt in 2010. The gruff-throated Grey is a rarity in contemporary music — a truly commanding presence at the front of the stage. Those who’ve caught him live speak of him, and of Mofro, in reverential tones: they know they’ve seen a legend in the making.

But even legends have their own heroes. Toots Hibbert of reggae stalwarts The Maytals has always been an artist whose dedication Grey has tried to emulate. Now, on “The Sweetest Thing,” the latest single from Georgia Warhorse, Hibbert and Grey have joined forces for a soul-soaked duet. The two singers trade lines, comment on each other’s verses, swap choruses, and push each other to squeeze every last bit of juice out of the song’s melody. The respect and admiration the two artists have for each other is evident — as is their excitement to be working, and making explosive music, together.

“The Sweetest Thing” is an unforgettable song, but it’s only one of the many killer tracks on Georgia Warhorse. Hibbert is the guest of honor on the set, but Mofro has made room for Derek Trucks of the Allman Brothers to impart some white-hot Southern soul of his own to album closer “Lullabye.” On the gorgeous, smoldering “King Hummingbird,” Grey doesn’t need any help at all: the Floridian rocker brings it home with the urgency of a street preacher. By no means the first Mofro album (the combo has been making music for more than ten years), Georgia Warhorse is an alarm waking the world up to JJ Grey’s talent. “The B3 twists in your gut and the snare breaks pop in your spine,” crows Thom Jurek of the All-Music Guide in a rare four-and-a-half star review. “Georgia Warhorse may be the record that pulls JJ Grey & Mofro from the cult status they’ve enjoyed for a decade into the lights of the mainstream.”

Georgia Warhorse is named after a particularly resilient type of grasshopper, and the album is heavy with imagery taken from the natural world. Spookie Daly’s clip for “The Sweetest Thing” finds Grey and Hibbert in a comfortable habitat, too — side by side, in front of vintage microphones. The two singers share the spotlight like they’ve been doing it for twenty years, picking up on each others’ cues, and joining voices in harmony on the song’s refrain. It isn’t all footage of the two soul singers, though. Daly takes us on a tour of the South in summertime, catching ripples in the surface of the swamp, bees pollinating flowers, shadows dancing on the beach, and little kids eating ice cream. The whole thing is a celebration of life, and Grey is the master of ceremonies at this wondrous party.

We’re excited to be working in tandem with the good folks at Madison House and Alligator Records to bring you this soulful new clip. We’re equipped with copies of Georgia Warhorse for your on-air giveaways and listening pleasure (or you can go to www.JJGrey.com to download “The Sweetest Thing” for free). Their US tour also stretches until the end of 2010, so drop us a line to set a video interview with them when they come to your market! If you need more info, call Andy Gesner at 732-613-1779 or e-mail us at info@HIPVideoPromo.com. You can also visit www.MadisonHouseInc.com, www.Alligator.com orwww.JJGrey.com to find out more about JJ Grey & Mofro.