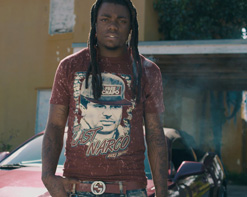 Florida hip-hop is a world of its own: it’s got its own steamy, distinctive sound, its own cast of indelible, magnetic characters, its own attitude and stance, and its own musical and lyrical vocabulary. It doesn’t beg to be ratified by the musical mainstream. But whenever outsiders stop and listen to what’s going on in these swamps, they tend to like what they hear. Florida remains a place where a hot single from a bold independent artist can take over dance clubs and local radio shows and rule the summer with little or no help from the wider music industry. Juice Yung’n has a single like that – a brash, shoutable, undeniable track that’s set to become the latest in a long line of Florida classics. From there, the rest of the country ought to be easy pickings.

“Aayy”, the latest from the Gainesville vocalist, is half rap, half R&B, and all fire. Just like the other ferocious singles by Juice Yung’n, it’s a candid, unapologetic look at life inside the trap: the perils and pleasures of a rough upbringing and the consequences of a dangerous lifestyle. “Aayy” follows a pair of ferocious club bangers – Gainesville anthem “Where I Came From” and the slinky, mesmerizing “All I Want To Do” – that have firmly established Juice Yung’n as one of the most exciting new voices in Florida and Supa T Records as a reliable source for energetic trap music.

Like “Where I Came From”, “Aayy” was produced by a legendary South Florida artist who deserves wider recognition for his daring musical choices. Tony “Gorilla Tek” Castillo has worked with the heavy hitters of Florida hip-hop: stars with national reputations like Trina, Rick Ross, and Pitbull as well as respected regional voices like Jacki-O, Grandaddy Souf, and Iconz. Most of all, he’s collaborated with Trick Daddy, a mesmerizing storyteller and the godfather of Florida trap music. It’s in the footsteps of these giants that Juice Yung’n walks – and every step he takes is assured. He’s the heir to a great tradition, and he knows it.

Juice Yung’n has always been proud to represent Gainesville, and he’s shown off the seamier side of his home city in his prior videos. But for “Aayy,” he turns the camera further south. Terry Elliott Sr.’s gripping clip finds the rapper in Miami’s notorious Liberty City neighborhood, presiding over a trap house that’s distinguished by its seedy glamour. He raps on the roof, in the backseat of a Rolls Royce, and in the front yard, his cars and boys behind him, a roll of hundreds in his hands. But everywhere he turns, there’s trouble: masked men in the alleys, unmarked cars on the roads, and a hovering sense of menace. The stakes are high, the thrills are real, and the beats and performances are irresistible.

We’re very pumped to be working with the crew at Supa T Records to help bring their deep roster of talent to the forefront of the national musical landscape. Please don’t hesitate to get in touch to let us know what we can do to help secure a spot for this video within your programming. Call Andy Gesner and the HIP Video Promo team at (732)-613-1779, email us at info@HIPVideoPromo.com.