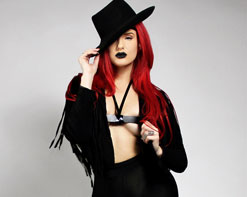 2016 is poised to be the breakout year singer/songwriter Justina Valentine has been fighting for her entire career. Widely considered to be New Jersey’s best-kept secret, the consistently-fresh hip-hop and soul infused artist is regularly spotlighted across the urban musical landscape as a result of her unparalleled passion, prolific body of work and frequent co-signs/collabos with an ever-growing list of rap game heavyweights including Fetty Wap, Futuristic, Infamous, ShyBoogs and Peoples (to highlight a few). In other words, she’s become an undeniable mainstay in the underground music world. With a gritty and diverse list of musical influences that include Lil Kim, Tupac, Eminem, The Beatles and even her own father, a vocalist and musician, Justina has sharpened her craft and officially developed into an entertainer that can’t be ignored. Following the success of her 2014 Red Velvet Mixtape, she’s back with a stirring music video for “Muse”, arguably her most powerful single to date, and it’s off her hotly anticipated new album Scarlet Letter.

Since the release of her now-classic EP, Valentine, in 2013, which went on to chart in the iTunes Top 30, Justina’s been giving it her all, completely dedicated to continue pushing the boundaries of her music, growing and evolving as an artist, and keeping her enthusiastic fanbase on their toes. The raspy voiced, red headed songstress’ unmatched lyricism has garnered high praises from many corners of the entertainment spectrum including some of the top music websites like MTV, MTV2, AOL, XXL, PerezHilton, VladTV, and Thisis50. Additionally her original music has  been featured on popular television shows including NBC’s Steven Spielberg hit Smash, VH1’s Mobwives, MTV’s True Life, Oxygen Network’s Running Russell Simmons and Logo TV’s A-List NY. Since the release of her game-changing new album Scarlet Letter, Miss Valentine has been garnering serious attention from New York radio powerhouses Hot 97.1 and Power 105.1, as well as Hot 93.7 in CT and within many other major markets such as Miami, Houston, Atlanta, New Orleans, Texas, Ohio and Georgia. And to top it all off, Justina is the newest cast member on Nick Cannon’s Wild’n Out and will be debuting this summer in its 8th season! It’s never been a better time to be on Team Valentine.

“Muse” is a sexy, slow-burning R&B banger that stirs up all kinds of risqué/provocative emotions and will undoubtedly satisfy diehard fans in addition to making countless new ones. Think Nicki Minaj meets Frank Ocean – naughty yet sophisticated. The Shy Boogs-produced track is a stunner so enticing it’s downright hypnotic and Justina bears her soul on it, opening up and revealing her inner thoughts on a man who she’s fallen hard for. She’s hooked and she knows it – there’s no turning back: “This is it I say / I’m out of my daze / You completely fascinate me / My motivation – My whole inspiration / My reincarnation – You, you, do that”. She goes in: “You inspire me / Let me inspire you / Take me and use me / Love and abuse me / Hold on don’t lose me no, don’t lose me no.”  The song is a modern masterpiece and the Ronald Reid-directed music video manages to match its beauty with exquisite cinematography and lustful shots of Justina who portrays a gorgeous mannequin come to life. It’s a wild concept perfectly executed.

We’re honored to be a part of the Justina Valentine’s promotional team once again. Miss Valentine’s currently on her nationwide Hate Us Cuz They Ain’t Us tour which will continue throughout March. For more info please contact Andy Gesner and the HIP Video Promo crew at (732)-613-1779 or email us at info@HIPVideoPromo.com .

For info about other Justina Valentine music videos, click HERE