La Strada “Wash On By” 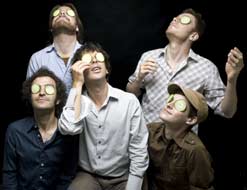 Greetings everybody, it’s Andy Gesner and the HIP Video Promo staff, here with a brand new clip from one of the most exuberant — and eclectic — bands in New York City. La Strada’s engrossing video for “Wash On By” is something of a concert documentary, something of a thriller, something of a sinister Super-8 travelogue, and maybe even something of an indie-experimental flick. In other words, it’s a perfect match for a group of whip-smart pastiche artists with a sound that defies easy categorization. True, La Strada’s work has been compared to that of the Arcade Fire, the Bowerbirds, Neutral Milk Hotel, and Okkervil River — but that’s only a direction. Take one listen to New Home and you’ll realize: this fiery quintet has charted its own course.

Call La Strada a folk-rock act, and you won’t be wrong — they’re fond of acoustic instruments, warm and rootsy melodies, heavenly multi-part vocal harmonies, and bouncy backwoods rhythms. But the tracks on New Home incorporate elements of Seventies rock, world beat, experimental pop, theatrical Americana, and traces of sacred music as well. Unafraid to reach for a big sound, La Strada often colors their arrangements with accordion, bright brass and sweet strings. “Wash On By”, the first single released from the set, features an impassioned rock performance from charismatic frontman James Craft — but also radiant cello and violin parts that wouldn’t sound out of place on a classical recording.

It’s all immensely imaginative, and it’s won La Strada a dedicated fanbase in Brooklyn — and beyond. The rest of America is waking up to New Home: “Loved You All Along” was recently featured in the HBO black comedy Bored To Death. The band’s turn at SXSW was ecstatically received, and the show launched La Strada on a nationwide tour. Reviews for the songs on New Home have been universally positive; the relaxed, welcoming production by Kyle “Slick” Johnson (Modest Mouse, Cymbals Eat Guitars) has been praised as well.

As you might expect from a band named after a Fellini film, La Strada takes their videomaking seriously. The “Wash On By” clip has the breezy, hazy, slightly nostagic feel of a home movie — which only makes the clip’s nightmarish elements all the more haunting. Shot in the woods near a creepily abandoned motel, the quintet sets up and plays on the cracked pavement of an overgrown tennis court (Craft even bats a ball around). We’re introduced to a fetching young woman — but it’s probably best not to think about what she’s up to. Especially since she’s first seen with a shovel, and also because the camera catches her dragging a man across the forest floor by his ankles. She’s perfectly at home in the woods: she’s as lovely as the muted light that plays across the treetops and the weathered motel sign.

Big props to the Ernest Jenning Record Co. for bringing us on board to spread the word about this incredible band and video. We’re happy to hook you up with all things La Strada, including copies of New Home, so don’t be shy about getting in touch! If you need more info, call Andy Gesner at 732-613-1779 or e-mail us at info@HIPVideoPromo.com. You can also visit www.ErnestJenning.com to find out more about La Strada.