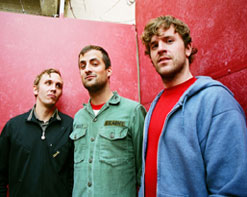 Hello friends and fellow music lovers! It’s Andy Gesner and the staff from HIP Video Promo. The bass player has named himself after legendary attorney Clarence Darrow. The singer dispenses his brutish social and literary criticism in syntax that borrows its structure from the classics and its tone from playground taunts (or is it the other way around?) Titles on the new album reference evolution, Judy Blume, Guns ‘N’ Roses, and theories of television. Long before Sufjan Stevens made himself famous as a singing Illinois geographer, they offered their own (and much more trenchant and specific) Guided Tour Of Chicago. They may not be the best-known punk band in America, but The Lawrence Arms are easily one of the cleverest. And with Oh! Calcutta!, they’ve made the album that their fans always knew they could make: vitriolic, relentless, tuneful, excoriating, witty, conceptually coherent, and unfailingly smart.

Veterans of late-Nineties Chicago punk luminaries The Broadways, Chris McCaughan (guitar) and Brendan Kelly (bass) have always been agitators and intellectual provocateurs. Audience members at Lawrence Arms shows often come away with earfuls of vitriol – not just from the scathing material, but from the band’s hilarious between-song antiestablishment hectoring. Brendan Kelly has gotten so good at it that his wise-guy tactics have landed him on the Daily Show with Jon Stewart, and made him something of a populist hero in urban Illinois. Here’s a band that has always been willing to verbally abuse the rich and powerful in the name of authenticity and punk irreverence, and to use their platform to crystallize the feelings of listeners who feel the same frustrations but who lack the language to express them.

But no matter how heady their discourse sometimes gets, The Lawrence Arms are rockers first. Constant touring (the group will be hitting the road again with NOFX this spring) has tightened and focused the trio’s sound, and the songwriting is more economical and pointed than ever. And Kelly’s sense of time – which has always been a strength – has now become remarkable: he spits out his words in cadences as precise as machine-gun fire. “The Devil’s Takin’ Names” is a blast of melodic aggression, an expression of defiant resistance, and a cheeky acknowledgement of weakness. Like the best punk bands, these guys wring black humor from their own ambivalence and inertia. Where other trip over their own angst, the members of The Lawrence Arms smirk and shout, shake their fists, and then step back to laugh at themselves.

On camera, Kelly, McCaughan, and drummer Neil Hennessey (originally from Chicago pop-punk outfit Baxter) perform sarcastic outrage and playful mugging with the skill of natural comics and the unmistakable righteous anger of rabble-rousers on the barricades. The clip for “The Devil’s Takin’ Names” finds the trio living like vagrants in a half-built factory, dressed in rags, sleeping under newspapers and dumpster-diving. Yet when they walk groggily into the band room and begin to rock, a strange transformation occurs: before their sleepy eyes, the guitarist and bassist transform into suit-wearing, cellphone-toting business professionals. It’s momentary, of course, and they blink back into bums as they play, but still, an impression lingers. As Kelly and McCaughan sing bitterly about thing they haven’t tried but they knows they don’t like, the madness grips the punk band, and before our eyes, they’ve shaken hands with an alternate destiny. Drummer Hennessy, on the other hand, is left behind in tattered clothing as the two frontmen walk off to the boardroom, or perhaps the next corporate punk show.

We are stoked to be working with cool folks over at Fat Wreck Chords to being you this clip. We will have plenty of copies ofOh! Calcutta! for on-air giveaways. If you need more info, call Andy Gesner at 732-613-1779 or e-mail us at info@HIPVideoPromo.com. You can also visit www.FatWreckChords.com.