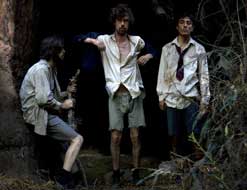 Greetings programming friends, it’s Andy Gesner and the HIP staff bringing you the second video from one of this year’s most critically acclaimed indie album. Prepare yourself for another slightly disturbed video, brought to you by none other than Mute‘s very own Liars, of course. The video may not be of the highest quality, but that’s not to say the clip for “The Overachievers” – directed by Liars member Aaron Hemphill – doesn’t get the job done. We mean this quite literally in the most cryptic way you can even begin to imagine.

You get the feeling that something isn’t quite right from the very beginning of the video. A pretty modest, business looking-type man in a three-piece suit first walks out of an elevator and into the comfort of his own apartment. As the synth-filled, thrashing melody of the song kicks into overdrive, the camera follows the man changing his clothes in his closet and a sudden look of guilt falls upon his face. The scene switches to the man mixing a drink in a blender and, without warning, a clip of a hanging bag that appears sloppily tied up in a dark corner of a room is spotlit and you clearly see blood dripping down into a bowl of eggs. Trust us, it’s as cryptic as it sounds. So much so that the next scene focuses on the man running on a treadmill, and he appears to be running faster as lead singer Angus Andrew chant-sings “LA!” over and over, which, by coincidence maybe, sounds more like him screaming, “Help me!”

When Pitchfork first premiered the clip, they described the video for “The Overachievers” as simply starring “an American psycho and a dripping bag of blood … which is about as unsettling as you’d expect.” It’s a spot-on account that somehow still leaves a bit to the imagination in a way only Liars can, well, achieve. It’s clear that this trio has an enigmatic obsession with violence and are just as experimental in vision and sound as ever.

Really, this all can be traced back to the band’s critically acclaimed Sisterworld. Music mag giants like Rolling Stone andSPIN praised Liars’ fifth release, with the latter noting that the album is “a total Los Angeles record, but not the Tom Petty, good-vibes kind. Sisterworld veers between frenzy and foreboding, exploring the City of Angels’ demonic side.” Keeping this in mind, “The Overachievers” as a whole package makes total sense – albeit taking the whole sinister aspect a shot too far.

We’re so excited to be working with Liars and the team at Mute again. If you need more info, call Andy Gesner at 732-613-1779 or e-mail us at info@HIPVideoPromo.com . You can also visit www.Mute.com to find out more about Liars.