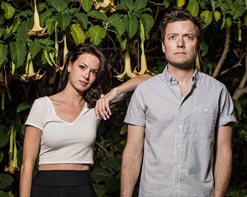 Just like a storm on the horizon, little hurricane is a whirlwind of sound who is rapidly garnering national attention through publications such as Rolling Stone and Paste Magazine for their unique and fearless approach to the two piece band. Formed in early 2010 in San Diego, little hurricane began when front man Anthony “Tone” Catalano, and drummer CC Spina met via Craigslist and have been creating dirty blues together since. little hurricane’s bluesy soul stems from Santa Cruz, where Tone was educated by his musical surroundings, and Chicago, where CC first created her back breaking beats.

The first album, Homewrecker, was a dynamic introduction to this duo, drawing on influences that range from Van Morrison to Jack White’s Dead Weather to create. It was a well-received effort, landing them high profile spots including Lollapalooza and SXSW in between a bevy of national touring. For their follow up effort, Gold Fever, the band immersed themselves in an actual gold rush town, Julian, California, recording the album in an apple-picking house built in the 1800’s. The end result is 14 tracks the dig in and get even bluesier and grittier than ever before.

Their first single, and video, from the new album is the hauntingly beautiful clip “Sheep In Wolves Clothes.” The video is a nostalgic journey through the infancy of a relationship of John and Sarah with its beginnings at a school dance to wedded bliss, parenthood, the struggles of staying in love, all the way through the pain of saying goodbye at their bedside. The parts of John and Sarah through the years are played by a variety of actors and actresses, each giving their own convincing portrayal. Though there is an overarching sadness, we the viewer can’t help but feel the butterflies in our stomach and a flutter in our hearts as we share in this journey of a life of love.

We’re incredibly happy to be working with little hurricane to bring you this new video and would love to have you catch them on their upcoming US tour. Contact Andy and the HIP Video Promo crew at (732)-613-1779 or email us at info@HIPVideoPromo.com . You can also visit www.littlehurricanemusic.com for more info.