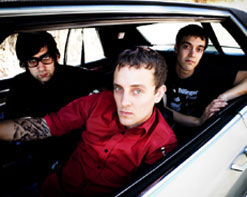 Greetings to all of my music video kindred spirits! It’s Andy Gesner and the staff from HIP Video Promo, back with another clip from a young band deserving of a wider audience for their terrific sound. The Loved Ones are a punk three-piece from Philadelphia with stupendous energy, a songbook filled with tunes reminiscent of The Descendents and an expressive singer who communicates hope, despair, and heartbreak without ever sounding weak or maudlin. Dave Hause is a storyteller who’s lived the underground, chasing from stage to stage in pursuit of that elusive connection with his audience: he’s played the smoky basement clubs and slept on cold floors, and his voice is simultaneously raspy with exhaustion and crackling with optimism. He might not be quite as smooth as those radio pop-punk singers, but his performances have a depth that his peers can’t pretend to.

Like the other members of The Loved Ones, Hause is a veteran of the ferociously competitive Philadelphia indie music scene – he paired with Dan Yemin, aka Kid Dynamite, in the scalding Paint It Black. The Loved Ones bassist Michael “Spider” Cotterman was also a Yemin associate: he played in the “classic” Kid Dynamite lineup that released the seminal Shorter, Faster, Louder. But The Loved Ones is no Kid Dynamite spinoff band: for one thing, Hause’s songwriting is much more traditional, disciplined and romance-dizzy, and trades hardcore sludge for pop-punk exuberance. “Jane” is a grand, desperate missive to a young love, delivered hoarsely and with the self-deprecating charm of Paul Westerberg. “I’ve got this guitar that I can barely play”, shouts Hause – but he’s going to play it proudly anyway, and deliver his enthusiasm to the woman he’s smitten with. His message is too urgent to be restrained by technical considerations.

The clip for “Jane” is as wry and charming as the song. The Loved Ones come off as charismatic D.I.Y. punks and a tight, three-man society of mutually-supportive musicians, chomping at the bit to bust through the defenses of their listeners and to reach them with their songs. The “walls” surrounding the kids in their audience are made of words: they text each other, send instant messages, and fiddle with their phones. Sitting together on sofas at a party, and crowded into a garage that’s been turned into a makeshift auditorium, they don’t communicate directly, choosing instead to stare into space and to let their machines serve as their interfaces. Words hang overhead like captions or thought bubbles, streaming from devices and thickening the air with insecurities, jokes, and offhand remarks. Lest you think The Loved Ones are playing holier-than-thou, rest assured that the band is complicit too – during a guitar break, despite the incredulous reaction of “Spider” Cotterman, drummer Mike Sneeringer takes a call on his cell.

But the song is, ultimately, too infectious to resist. A young couple who’ve put their phones aside to try to make a real connection are the first to really hear the music: they walk together into the crowded garage, and find themselves on the mic, singing along with Hause. Before long, most of the crowd has done the same. The words overhead disappear, and the kids at the party have broken the fourth wall, and are dancing between the bandmembers. It might all seem like a bit of a boast, but it’s done with such good humor and genuine love for the scene that only a cynic would question its sincerity. Besides, The Loved Ones have now opened shows for Against Me!, NOFX, Bad Religion, The Bouncing Souls, and The Explosion – and will soon be hitting the road in support of Keep Your Heart. They might be young, but they know a thing or two about moving the crowd.

We are thrilled to be working with Brian Archer from Fat Wreck Chords to bring you this clip from a band that we are all fans of here at HIP. We will have plenty of copies of Keep Your Heart for on-air giveaways. The band is currently on tour, so if they are coming through your area and you would like to set up video interviews or IDs, please don’t hesitate to get in touch. If you need more info call Andy Gesner at 732-613-1779, or email info@HIPVideoPromo.com. You can also visit www.FatWreckchords.com or www.TheLovedOnesBand.com to find out more about The Loved Ones.