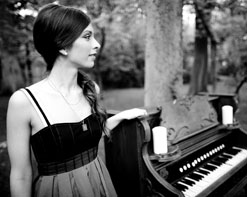 Whether you’re in a busy metropolis, the heartlands, the vastness of the desert, or surfing the coast, this next video was filmed there! For her new video, “Good Morning and Good Night,” Maggie McClure has traveled the nation to capture its diversity and vastness on camera to parallel her magnificent lead single. It’s this sort of attention to detail and the drive to realize it that makes Maggie a contender for the next big thing in the music world, and she’s well on her way.

“Good Morning and Good Night” is the attention-grabbing single of Maggie McClure’s new album of the same name. Not letting a second go to waste, Maggie kicked off the release opening for world famous recording artist Sara Bareilles to kick off her 2010/2011 nationwide tour. She also was invited to sing the National Anthem at the first NBA playoff game in Oklahoma history between the LA Lakers and OKC Thunder with over 18,000 people in attendance. Maggie’s songs were also recently featured on popular MTV shows The Hills and The City, as well as CBS’s hit soap opera, The Young and the Restless. Also, Maggie’s self-titled album was released in Japan and not only attracted thousands of fans there, but also in Germany, China, Switzerland, and everywhere in between! McClure doesn’t plan to slow down anytime soon, with national tours scheduled well into the summer season. This sort of love for the road has established Maggie amongst the crowds at various universities, festivals, and music venues across the nation in the last year, as she has spent most of it traversing the open highways of America making and meeting fans. This love for touring ties in perfectly with the concept for her new clip!

“Good Morning and Good Night” is a gorgeous pop gem about making a home of every place from coast to coast. So our young singer/songwriter/pianist actually filmed every part of the clip at the locations she sings about – from sunny Cali, to the bright lights of Vegas, to the open fields of Oklahoma, to the busy life of the east coast. Don’t let the concept frighten you into thinking this is some low quality tour video, as the clip’s top notch cinematography captures every moment and natural wonder rather vividly. To match the glossy clip, the record was produced and recorded in Nashville by famed producer Stephen Gause (Dave Barnes, Nathan Angelo, Steve Means and Micah Dalton). and resonates with infectious hooks and indie rock undertones. Needless to say, Maggie McClure is the complete package in mind, body and spirit, and is certainly set to make a smashing impact on the music market.

Join us in building a new form of popstar – one that is talented, creative, and in control of her destiny. Her fans relate Maggie’s sound mostly to artists such as Michelle Branch, Norah Jones, and Colbie Caillat, but we’ll let you listen and judge for yourself. We’ve got plenty of copies of Good Morning & Good Night for contests and giveaways, so make sure to let us know and we will hook you up. If you need more info, call Andy Gesner at 732-613-1779 or e-mail us at info@HIPVideoPromo.com . You can also visit www.MaggieMcClure.com to find out more about Maggie McClure.