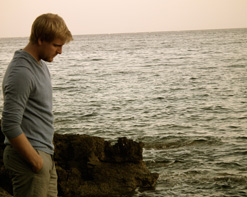 Greetings programmers! It’s Andy Gesner and the HIP crew with a clip from a fantastic and prominent new artist on the indie folk rock scene. Mandala, a one man project hailing from London and Princeton University simultaneously, has walked the halls with UK’s folk rock elite to debut his own take on the movement titled “Blue Darkening.” This video combines a man’s grand ambition with an intimate sound to bring you one of the most gorgeous and scenic videos shot by a single handheld camera you’ll have the pleasure of seeing.

Mandala, aka Cameron Mclain, grew up in London, going to high school alongside many now-famous UK folk royalty, including Winston from Mumford & Sons, Charlie Fink and Tom Hobden of Noah & The Whale, and even had a band with Andrew Davie of Cherbourg. Cameron was around at the beginning stages of this now world-famous UK folk scene, performing at some of the early country nights at The Bosun’s Locker. However, instead of hitting the road right after high school, McClain traveled to broaden his spiritual horizons at one of America’s finest institutions, Princeton University, study the art of songwriting with Pulitzer Prize winning poet Paul Muldoon and composition with Paul Lansky, a famous music professor whose musical works have been sampled by Radiohead. In August 2010, Cameron recorded a live EP, The Grace and the Grit, with his friends from the Princeton Jazz Ensemble. And after traveling between London and New York, he hooked up with Charles Newman (Magnetic Fields, Austin Hartley-Leonard, Soko) to record the debut Mandala record The Visitation, hitting the record stores October 18th via The Odes, which will be followed by a U.S. and European trek.

The music video for “Blue Darkening” tells the story of a couple in love. When you’re in a relationship, there are always little, intricate touches that belong to you and your loved one alone. In this video, Cameron ‘s interactions are extremely believable, because they are real! The girl in this clip happens to be his actual lover, and contains intense strokes of impressionist storytelling and symbolic imagery, all within a beautifully shot piece of nature. Filmed in upstate New York over 36 hours with a single handheld camera instead of the usual crew and apparatus lineup, the video is at its’ most vivid when the song explodes into full orchestration. The clip follows Mclain into the dark and then resolves in a gorgeous underwater sequence. “Blue Darkening” is as organic in its’ sound as it is in its’ imagery and creative process.

We are thrilled to be on the ground floor for the debut of an artist who is already stirring up every bit of the right attention. It won’t be long before the major press starts picking up on Mandala, given his credibility and the cool he inevitably radiates. Place your requests for copies of The Visitation, and we will be sure to hook you up when its’ available for you to preview. For more info call Andy Gesner at 732-613-1779, or email info@HIPVideoPromo.com. You can also visit  www.MandalaTheBand.com for more info on Mandala.