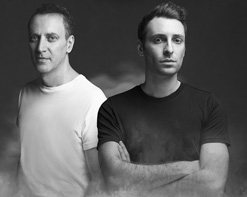 What makes a great summer song? It should come on with the easy inevitability of an ocean breeze, but it also needs to be sufficiently energetic to move the crowd at a party.  It needs to sound contemporary enough to capture the moment, but timeless enough to conjure memories of all the summers gone by. A great summer song is blissful, but also a little wistful — it carries with it a hint of the chill of the autumn to come. It needs to sound great in all summertime contexts: the block party, the gym, the highway, and especially the beach.

If your summer can use a song like that, we’ve got good news for you. MaWayy has delivered an ideal track to score the hot days and hotter nights. Everything about “Wrong” — the drum builds, the indelible chorus, the stuttering synthesizers that melt across the release like crayons in the sun, the syrupy, slowed-down vocal sample, and the yearning lead performance — radiates the warmth of a seaside strand. “Wrong” is the sort of effortless track you’d expect to get from a longtime EDM hitmaker; amazingly, it’s the MaWayy debut.

Yes, this is a brand new transcontinental collaboration between two musicians with deep discographies. The Emmy Award-winning Brian Wayy is a Los Angeleno who has composed music for hundreds of shows; he’s also a pop remixer with an extensive catalog of exciting electronic reinterpretations of songs by Paula Abdul, Rod Stewart, Diana Ross, and other stars.  The Iranian Masoud Fuladi — or Caspian Beat, as many of his international fans know him — is one of the most successful electronic musicians in his home country, and an attraction in the cosmopolitan city of Bandar-e-Azali. The two have never met in person, but the chemistry they’ve developed over the Internet is palpable in the irresistible grooves of “Wrong”.

A perfect summer song deserves a video to match. The clip for “Wrong” was filmed in a spot on the globe that’s synonymous with brilliantly sunny weather: the Greek island of Santorini. The bright blue domes of the Orthodox churches, the marvelous azure of the Mediterranean, the near-vertical cliffs that drop directly into the sea — director Ali Zamani, who has also shot videos for Snoop Dogg, T-Pain, Omarion, and many others — has captured all of it with such breathtaking fidelity that it could double as a tourist advertisement. But you’ll be forgiven if you don’t notice any of that, at least the first time through. That’s because you’ll be watching the real star of the show: the stunning Swedish model Bella Cirnski, who sears the celluloid in every frame she’s in (she’s in most of them.) There’s Cirnski on the beach, Cirnski in the water, Cirnski breaking the heart of a young man in the club whose own summer is slipping away from him. These dwindling days of August are precious commodities; here’s a song — and a short film — that can be a part of your own soundtrack.

We’re thrilled to be partnering with MaWayy on the promotion of the “Wrong” music video! Please let us know what we can do to get it in to your programming. You can contact Andy Gesner and the HIP Video Promo crew at (732)-613-1779 or email us at info@HIPVideoPromo.com or visit www.MaWayy.com for more info on MaWayy.