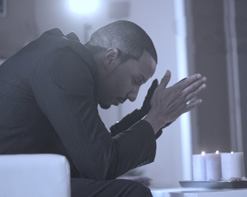 There are some people on this Earth that are hit with a lifetime of hard truths in a matter of a few years. Maybe the great powers of the Universe think they can handle it? In the case of Mba Shakoor, life has carved him into a man with the wisdom of a hundred years, in just his early adult life. With his passion for music as the anchor through every storm trying to knock him off his path, he’s brought us the new single, “‘Our DJ Love And Remembrance” to tell the heartbreaking story of his toughest challenge yet: Accepting the the loss of his partner in crime, the late, Salat “DJ” Shakoor.

Back in grade school, Mba and his brother, DJ, were tracing the schoolyard, writing poetry about anything that was on their young minds. One day, DJ suggested that Mba should learn to play the piano. If only these two young poets knew where this path would lead them. Their first single, entitled “Do or Die” was a battle song, proclaiming the statement that, regardless of the fact they were barely teenagers, they have chosen music as their path, and they would push themselves to achieve their goals until the day they die.

Their first official release, “Shock Treatment” (2008) was about their transition from east coast to west coast, and the realization that they were starting a new life at the bottom of the barrel in this industry. A few years and some more releases flew by for Mba and Salat when tragedy struck. In 2013, Salat Shakoor shockingly passed away. Faced with another all time low, Mba was again left with nothing but music, but this time, it came with the deep rooted goal of finishing what he and his brother had started. At Salat’s funeral, with tears streaming down his face, Mba was overcome by a power so great, he physically had to write down what was exploding out of his soul. That intense eruption of emotion became the lyrics and inspiration for Mba Shakoor’s new single, “‘Our DJ’ Love And Remembrance”.

This new single comes with a touching video detailing the impact that Salat Shakoor left on the people around him, especially his brother, Mba. Featured in the video is Los Angeles artist Anna Cymerman along with a large group of friends, family and fans to help chant the chorus, “It’s hard to watch a good man go down / we gon’ keep that record spinning for you / you’ll always be our DJ.” With his brother’s spirit as the wind at his back, Mba Shakoor will be fighting harder than ever to bring the positive musical message to the world.

We are absolutely ecstatic to be teaming up with Mba Shakoor to bring you the “‘Our DJ’ Love And Remembrance” music video, and see it included in your regular programming. Don’t hesitate to let us know what we can do on our end to make that happen. Please contact Andy Gesner and the HIP Video Promo team at (732)-613-1779, email us at info@HIPVideoPromo.com or visit www.Facebook.com/mba.shakoor for more info on Mba Shakoor.