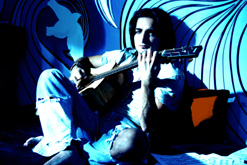 Greetings music video lovers nationwide! It’s Andy Gesner and the staff from HIP Video Promo bringing you an enticing and theatrical video that we consider a must-see! Here at HIP Video, it’s been our privilege to work with many extremely thoughtful musicians. We’d like to think that the clips we send you are intelligent and provocative, and that the artists who make them are, on the whole, smarter than the average guitar-slinger. But it’s safe to say that never before have we promoted an artist who has posted a seven-part work of philosophy on his band website. The tellingly-named Alex Deep – the man behind Merlinmoon – is a thinker. That commitment to intellectual exercise is reflected in every element of his project: his sound, his songwriting, his stage show, and his videos. The twenty-four year-old psych-rocker is out to open minds – and he’s got the instrumental talent, the musical imagination, and the charismatic presence to do so.

What’s more, where other independent artists run from any association with the past, Alex Deep is upfront about his influences.Stoned By Dreams, the independently-released Merlinmoon debut, evokes memories of Sixties and Seventies classics by The Doors, King Crimson, and especially Pink Floyd. “Days Of Rage Into The Light”, the album’s twenty-minute centerpiece, is a richly-textured and magnificently-recorded epic – prog-rock grandeur realized on an indie budget. Like much of Stoned By Dreams, “Rage Into The Light” is heavily informed by Alex Deep’s own philosophical writing. “Poppy Fields”, the lead single (and the name of the band’s initial EP) takes its title from a passage in the Merlinmoon exegesis. “It is up to each individual”, writes Deep, “to find the way to his own poppy field – a place where one can be free inside the limits of the mind, living dreams by following passions”.

“Poppy Fields” is an intriguing lyric from a far-sighted group – one sufficiently high-minded that they’ve been asked to perform at the United Nations Walk of Peace in San Salvador. That said, Deep and director Ricardo Korda also play on the psychedelic connotations of the flower in the trippy clip for “Poppy Fields”. Much of the video is a spirited literalization of concepts and images from the Merlinmoon philosophy: the singer appears in chains, bound to the demands of the material world. But it’s not all symbolism and surreal artistry. The stunning Mexican model Pia Watson is on hand, too, and she imparts some serious sizzle to the proceedings – especially when she’s passionately kissing Alex Deep in a field of flowers!

The video opens with Watson in her own artist’s gallery, laboring over a terra-cotta statue of a man with his head bowed. Troubled, she goes to visit Alex Deep, only to find him bound and restrained by chains. Uniformed women escort him into a disturbing-looking aperture – and once he’s through, an already-trippy clip becomes even more eclectic and engrossing. The Merlinmoon singer is confronted by a lord of gluttony: a bearded man on a makeshift throne, overindulging in food, drink, and sensual stimulation. Deep, too, is tempted by the gorgeous girls in his dreamworld. Back at his apartment, Pia Watson searches for him; the women with white armbands seize her and dress her in military garb. Meanwhile, Alex Deep’s strange adventures accelerate: he wanders past a mural decorated with musical notes, strains to escape from a small green room, and watches as a fallen girl soldier bleeds yellow paint against a tree trunk. It’s all fantastic and allusive, heavy with meaning, and it demands attention and repeated viewings – just as surely as Stoned By Dreams rewards close engagement with its sound and sentiment.

We’re very excited to be working with Alex Deep directly to bring you this beautiful new video. He has been kind enough to hook us up with plenty of copies of Stoned By Dreams for all of your on-air giveaway! We’ve also got lots of other cool Merlinmoon goodies to share as well, so drop us a line to get your hands on them! If you need more info, call Andy Gesner at 732-613-1779 or e-mail us at info@HIPVideoPromo.com. You can also visit
www.Merlinmoon.com to find out more about Merlinmoon.