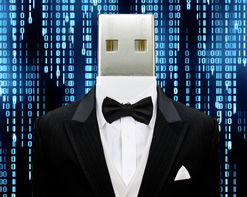 Much as we curse our machines and the world we’ve made with them, technology is not inherently troublesome. It’s what people do with that technology that causes problems. If you’re fed up with friends and family who are lost in the screens of their devices and can’t or won’t communicate, Mister Zuckerberg feels your pain. No, not that Mister Zuckerberg – the one in Silicon Valley with designs on your free time. Our Mister Zuckerberg is different: a distant relative of the Facebook founder, a singer, songwriter, video director, and soon-to-be septuagenarian who has had enough of modern electro-dysfunction, and who is determined to do what he can to strike back.

Mister Zuckerberg is a self-styled rock and roll retiree, and one with an urgent message that ought to resonate straight across the generations. To make his stand, he’s liquidated a chunk of his retirement fund – and poured the proceeds into a single and video that make his objections explicit. “Digital Rain” is a broadside against techno-conformity, delivered, in keeping with the song’s theme, through an icy vocoder setting.  The track recalls both the robotic protests of the early new wave era and the left-field pop of Mister Zuckerberg’s youth, and it’s designed to penetrate (or at least insinuate its way into) the consciousness of the ardent social-media user. Chilly it is, but Mister Zuckerberg’s passion is apparent in every beat.

He’s also matched “Digital Rain” with a clever – and hypnotic – animated clip that enhances its critique.  The images are occasionally abstract, but the meaning is clear: the entire digital sphere has come under the thumb of a few powerful interrelated interests. We’re shown a torrent of zeroes and ones – a genuine rainfall of data in its rawest form.  But this isn’t a free and chaotic flow of information. Instead, the digits are herded into specific shapes: points on a great grid, water tumbling from a showerhead, dominoes falling in sequence, and many others.  If you’ve ever had any objections to the way that social media has warped the world – and who, at this point, hasn’t? – you’ll sympathize.  And if you’re at all like Mister Zuckerberg, well, you may just have found your anthem.

It’s rare that we come across an artist that is as fascinating right out of the gate as Mister Zuckerberg. His story, and more importantly, his artistic output is compelling on every level. We think viewers and programmers will very much dig this slightly off-center project. As always, you can contact Andy Gesner and the HIP Video Promo team at (732)-613-1779, email us at info@HIPVideoPromo.com for more info on Mister Zuckerberg.